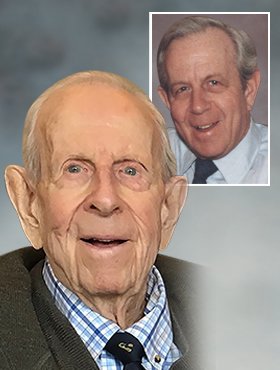 Alexander (Alex) John Cosway, beloved husband of the late Irene Cosway (nee Clark), passed away peacefully at home with his family on Friday, May 14, 2021 at the age of 93.

Alex was born on March 20, 1928 in Toronto, Ontario, to William and Elizabeth Cosway (nee Sunter). He grew up in Toronto with brother William and graduated from Western Technical-Commercial School. At the age of 15 he met Irene Louise Clark and on September 10, 1949 they began their seventy-one years of marriage together. They spent most of their married life in Toronto raising their three daughters there. Their second home was “Gar-Vel House” in Muskoka, Ontario, where Alex helped out at his Aunt’s summer guest house. It was everyone’s favourite place. Alex and Irene explored all ten provinces, deepening their love of Canada. In 1994 they built their dream home in Muskoka where they enjoyed gardening, the lakes, birds and wildlife. In 2003 they moved from their home in Muskoka to Calgary, eventually moving in 2017 to their favourite Alberta town, Cochrane.

One of Alex and Irene’s favourite activities was driving out to the mountains for a picnic lunch. Their seventieth anniversary was celebrated at Lake Louise, a very special place for them. Alex loved the quote “the mountains shall bring peace to the people.”

Among Alex’s early work experiences was at age 15 with the Ontario Farm Services Force in southern Ontario, harvesting acres of asparagus to support the war effort. After high school, unable to attend university due to the influx of returning servicemen, he apprenticed as a Quantity Surveyor with several architectural firms, becoming highly experienced and respected. A two week temporary position in 1951 with Toronto architects Marani and Morris turned into a forty year career. In 1959 Alex was one of the thirteen founding members of the Canadian Institute of Quantity Surveyors and the only Canadian. Of this he was very proud.

Alex embraced life and brought joy into the lives of everyone. He was a true gentleman, a patient, kind, generous, giving and loving man. He had the ability to lighten up any situation with his great sense of humour and gracious manner. He loved people and enjoyed meeting people from all over the world. Family meant everything to Alex. He loved visits from family, especially his grandchildren. From the very first day of the Covid lockdown in March 2020 he began calling his daughters at the same time every single night, a practice he continued until his death.

Alex loved gardening, woodworking, building, boating, fishing, feeding and watching the wild birds. He respected and appreciated the beauty of nature. He loved all animals. He equally appreciated big band jazz and classical music. He loved exploring the back roads of Ontario and Alberta. He was an accomplished builder and renovator, building their first house in Toronto, renovating their second, and eventually designing and building their Muskoka home. Alex was one of the pioneers of the Toronto recycling movement. Up until his death, Alex had a memory that put most of ours to shame. He loved to handwrite letters which he freely sent out to any person or institution meriting compliment, criticism or correction. He was a lifelong learner, signing up for his first online course at the age of 92 to study the wild birds.

The family would like to thank the amazing Cochrane Home Care team for their loving care of Alex during his stay at Grande Avenue Village and at his Cochrane home. Thank you Marilyn, for your loving 24/7 care of Dad so he could be at home.

Left to mourn Alex’s passing are his daughters, Marilyn Cosway, Joan Cosway-Hayes, Linda Cosway; son-in-law William Hayes; grandchildren, Awun Bell, Jesse Porter, Matthew Hayes, and Erin Porter; and many nieces and nephews. Alex was predeceased by his beloved wife Irene on March 16, 2021, and by his brother William A. Cosway in 2018.

Please, no flowers. To honour Alex you could explore a back road, spend time in the mountains, get to know a stranger, study the birds, and live your life spreading kindness and joy. A donation to the Cochrane Humane Society, 62 Griffin Industrial Pointe, Cochrane, AB, T4C 0A3, Telephone: (403) 932-2072, www.cochranehumane.ca, or to your local Food Bank would be appreciated by Alex.

A small private gathering will be held at a later date. Condolences, memories and photos may be shared and viewed on Alex’s obituary at www.McInnisandHolloway.com.

Share Your Memory of
Alexander (Alex)
Upload Your Memory View All Memories
Be the first to upload a memory!
Share A Memory
Send Flowers