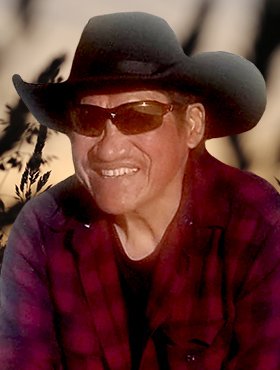 Mcfarland Harrison Powderface was called home by our Creator on Tuesday,June 8, 2021 at the age of 54 years.

Mcfarland was raised amongst both grandparents as a child and learned to respect our cultural and traditional ways of the Stoney/Nakoda people. He acknowledged his relations the traditional kinship way and hardly called people by their names no matter how old they were.

Mcfarland was an Ade, an awesome uncle to his circle of nephews and nieces and a grandfather to the grandchildren he took as his own.

He had a sense of humour that would make a person laugh at the oddest of times. Macfarland used to sing in powwow drum groups in his younger days. He was also an avid horseman who helped break and train horses; he also rode in a couple rodeos in saddle bronc prior to his back injury.

He was very proud when he worked as an extra in the movie Legends of the Falls, and his role as being a part of the war camp. He would sometimes look back and tell stories of himself and would make people laugh. His kindness and gentle spirit will be missed by all. He had a passion to travel and camping.

McFarland is survived by his brothers Kevin (Agnes), Alfred (Glenna), Ferdinand Dixon; his sisters Vernade (Darren) Applegarth, Charmaine and Naomi Dixon. His uncle Sykes (Wanita) Powderface; his cousin/brother Arthur Wildman; his special nephews Mac Kootenay, Niel Beaver and George Myron Rollingmud. He is also survived my numerous cousins and extended family members of Eden Valley and Morley. We apologize if we have missed anyone.

McFarland was predeceased by his parents Gatine and Christine Dixon; his siblings Andrew, Doyle, Shaun, and Petrina. His niece Faith whom he considered his little sister in March, 2021. His paternal grandparents of Eden Valley Mcfarland and Martha Dixon, and his maternal grandparents Harrison and Becky Powderface of Morley.

Funeral Services will be held at McINNIS & HOLLOWAY (Cochrane, 369 Railway Street, Cochrane, AB), on Monday, June 14, 2021 at 12:00 p.m. Graveside Service to follow at Chiniki Cemetery (Morley, AB).  Condolences, memories and photos may be shared and viewed on Mcfarland’s obituary at www.McInnisandHolloway.com.

Share Your Memory of
Mcfarland
Upload Your Memory View All Memories
Be the first to upload a memory!
Share A Memory
Send Flowers