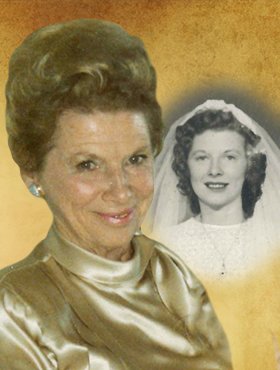 Agnes was born in Calgary to Jim and Roselean Fitzsimmons on April 10, 1927. She was welcomed by older siblings George, May, Margaret and Elizabeth. She was later joined by younger brothers Jimmy and Allan. Growing up in a big Irish family on what was then the western outskirts of Calgary provided Agnes with many opportunities for adventure and outdoor exploration. Roaming the foothills on horseback with her brothers, sisters and friends developed her love of animals and nature. Her kind, generous and fearless spirit was seen by all who knew her.

Agnes was christened at Sacred Heart Roman Catholic Church, had her first communion there, was married there, and will have her funeral there. She attended Sacred Heart School and then St. Mary’s Girls’ High School. She won a scholarship to attend teaching college in Toronto but did not attend owing to wartime conditions.

Later in the Second War, Agnes volunteered as a military driver transporting troops and equipment between various depots in the Calgary area. She followed the example of then - Princess Elizabeth in this service. She did not often speak of these times, and did not renew her driver’s licence until she was in her mid-fifties.

Agnes Lillies Fitzsimmons married John Henry Westlake in September of 1949, and embarked on a lifetime of travel and new horizons. As a young Army officer studying engineering in Edmonton, John spent fall, winter and spring sessions at U of A and summers in Army training. Agnes declared it was the coldest she had ever been.

Her life as an ‘Army Wife’ was filled with challenges and delights. Her husband was frequently away on military assignments and she found herself miles from home among strangers. Frequent changes in postings during and after the Korean War led to living in the Maritimes, Ontario, Quebec and around Alberta. Her daughter and son, Kathy and Jimmy, were both born on Ontario army bases. Agnes was delighted by the ‘High Society’ exposure found in military celebrations. Formal dinners at the Officers’ Mess and Grand Balls in honour of visiting dignitaries and Royal Personages seemed to her as being in a fairy tale. Several life-long friendships were forged during these times.

However far away she was, Calgary was always Home. She dearly missed the comfort of her loving family and kept in close contact through letters and visits. She travelled across Canada by train many times to reunite with her loved ones back home. In the early days of passenger air travel, Agnes narrowly missed a fatal plane crash and was presumed dead by her family. It turned out that an error in booking caused her to be delayed in Ottawa and put on a later flight, arriving in Calgary to find a grieving family mourning her loss!

After getting out of the Army in the Sixties, the family moved back to Calgary and it remained home base ever since. Her husband’s work at SAIT led to his promotion to Head of the Electronics Department and of the International Education group and gave Agnes new opportunities for seeing the world. England, Europe, the Soviet Union and Asia beckoned. Her home contained many souvenirs from “…far away places with strange-sounding names…”

Aside from her home in Calgary, Agnes and her family shared a cabin in the Kananaskis country in the Sixties with her sister Elizabeth, her husband Tom and their family. In the Seventies, both families left K-country to build their own nearby cabins in the Shuswap area. A condo in Hawaii added to the recreational residences in the Eighties. Many happy times were had at these places over the years, sharing visits with friends and family.

Agnes is survived by her daughter and son-in-law, Kathy and Blaine; son and daughter-in-law, Jim and Leslie; three grandchildren, Alyssa, Ryan (Evie), and Joce; and three great-grandchildren, Alex, Sawyer and Hailey. Agnes is also survived by her brother and sister-in-law, Allan and Dolores; and by numerous nieces and nephews, the children of all her siblings, as well as their spouses and children in turn.

Reception will follow at the Sacred Heart Church hall

Share Your Memory of
Agnes
Upload Your Memory View All Memories
Be the first to upload a memory!
Share A Memory
Send Flowers