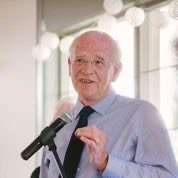 Vic Clayton was a wonderful man. I enjoyed working with him at St. Margaret’s School in Victoria. My heartfelt condolences to Sherry and his family. Kristina Mayer ( Botten) Chicago, Illinois U.S

Dear Sherry, Dave and I are sorry to hear of Vic’s passing. We have spent the last few days remembering our days at Carleton, your wedding in Ottawa, your first apartment in Markham and then your house. We also remember staying at your home and making a memorable trip in the rain to see the Santa Claus parade. These wonderful memories of time spent with you, Vic and your kids hold a special part in our hearts. We send our condolences to you and your family. Thinking of you, Gail and Dave

My condolences to Vic Clayton's family and friends. I feel very sad at his passing.

I met Vic Clayton when he and Anthea Waterfield called me in for an interview in 2002 when St. Margaret's School was looking ahead to its Centennial in 2008. I was hired to establish the SMS Archives with the Heritage Committee and to write the 100-year history of the School - Servite in Caritate. This collaboration lasted until 2009. Vic was committed to the history of the School and instrumental in establishing the idea of the book, promoting it with the Board, and supporting myself and the Heritage Committee.

I consider Vic Clayton as an important person in my professional life and feel privileged to have worked with and known him.

Vic and I worked with each other for over a decade in two schools - Royal St. George's College and Holy Trinity School. As a consequence, we became good friends and continued our collegial friendship as Heads of our respective CAIS schools.

I admired Vic for his ever present sense of humour and his calm approach to his work. He maintained an even keel in the choppiest of waters. As a leader, Vic was empathetic and loyal which endeared him to his colleagues. He never shied away from a challenge and never stopped until the job was done.

Above all of this, Vic was a devoted husband and father. He rooted himself in his family and was proud of what his wife and children accomplished in their lives. No doubt he will be terribly missed by them.

I am honoured to have known Vic and to have called him my friend.

It is with deep sadness that I received news of Vic’s passing. He was a dear friend to me and a source of strength at Holy Trinity School. He will be remembered with fondness as a respected educator and a compassionate leader. My sincere condolences and prayers are extended to the family. I will miss our conversations but he will remain in my thoughts.

Our sincere condolences to all of Vic's family. We are saddened to hear the news of his passing. He was a champion of our daughter, and indeed of all the girls at St. Margaret's. We moved from Toronto to Victoria and enrolled our daughter in St. Margret's in large part due to him. He is fondl remembered.by the Danylkiws.

My sincerest condolences to all of Vic's family. He truly loved and was devoted to St. Margaret's School. He visited the Junior School daily, enjoying every moment with the children and staff. Thanks to him, I moved to Victoria, finding a wonderful life here.

My sincere condolences to the family. From his first day at St Margaret's Vic was an excellent example of quiet and compassionate leadership. I have thought of him often over the years and was deeply saddened to hear of his passing.

My sincere condolences on the passing of Vic. My thoughts and prayers are with you all at this most difficult time.

Treasurer the memories, they will give you comfort in the days ahead. Rest In Peace VIC