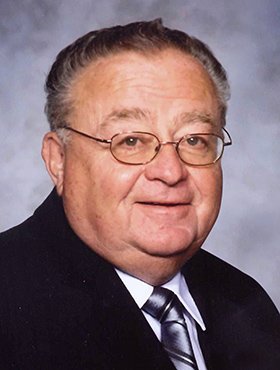 Al was a devoted husband, father and grandfather. He was born in Buchannan, SK, and lived a life on the family farm, until his parents moved the family to Calgary. Here, Al went on to attend St. Mary’s All Boys High School. Later, Al met the love of his life, Margaret Schmaltz from Beiseker, AB, and they were married on May 30, 1964.  Al worked proudly as a Safeway Manager for many years, while him and Margaret raised their four children. Al enjoyed family time, traditional celebrations, a good party and world travel. He was an active member of the Catholic Church, as well as Knights of Columbus and supported families in Mexico and Haiti. Al ventured into becoming a Business Manager of convenience stores. Tucker’s Convenience Store was where Al semi-retired, which allowed him to be actively involved in the lives of his eight grandchildren, and to embark in the game of golf. Al and Margaret celebrated forty-one wedding anniversaries, and many celebrations filled with joy, laughter and dancing together. Al lost the love of his life, his wife Margaret on May 29, 2006. He had many friends and business associates. He loved to entertain or be entertained and could always be found on a golf course some where. Al went on to retire in 2019.

Al is survived by his four children and their spouses, Mary Ann and Mike Fullerton of Calgary, AB, Kenneth Soloski of Cochrane, AB, Frances and Joe Gaddi of Chestermere, AB, and Dale and Sherry Soloski of Calgary, AB; his eight grandchildren, Madison and Matthew Fullerton, Tyson, Courtney and Alyssa Soloski, Maggie Gaddi, Brooklyn and Sydney Soloski; as well as numerous nieces, nephews, cousins, and friends. Al is also survived by his sister Joyce Huber.

Besides his loving wife Margaret, Al was also predeceased by his parents, Anna and Joseph Soloski; brothers Bernard and Rudy Soloski, and a sister Betty Brezinski.

Relatives and friends are invited to Prayers and Tributes at McINNIS & HOLLOWAY (Eastside, 5388 Memorial Drive NE, Calgary, AB) on Wednesday, August 4, 2021, at 7:00 p.m.