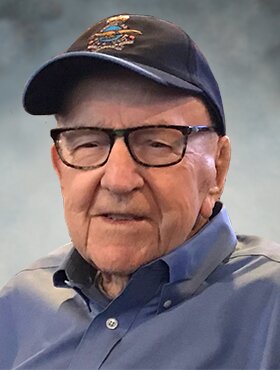 Chris was born and grew up on a farm in Cedar Falls, Iowa, the fourth of 6 siblings. His family moved to Carseland, Alberta, in 1929 and so an incredible work ethic was instilled during the “dirty thirties”. At the age of 22, he volunteered for the Canadian Air Force and served as an air frame mechanic based at RAF Wombleton, York, in England. During that time, he met and married the love of his life, Nancy (née Kirkland).

They were married for 73 years and raised five sons whilst living on air bases in Calgary (Currie Barracks), Stavely, Claresholm, Manitoba (MacDonald), Moose Jaw and Ottawa (Rockcliffe). After retiring from the Air Force in 1971, they returned to Calgary where Chris worked for Debolt (Chubb) repairing and maintaining bank vaults and locks throughout Alberta and southern BC. In 1979, he bought Crown (ceiling) Textures, fully retiring in 1987.

Chris enjoyed many interests: playing pool with his sons, making the best cinnamon buns in the world and the worst wine, camping, playing computer games with his wife, gardening and woodworking. He could fix anything, from a delicate watch to a Lancaster Bomber, but his life truly revolved around family.

Chris was babysitter, ambulance driver, sports cheerleader, and teacher. He was kind and tolerant, patient, honest and hardworking, with a wonderful laugh. He was always interested and this curiosity kept him young at heart. He was so generous with his time, and was  a great listener, leaning in with huge hands clasped, and a great story teller. He was a wonderful role model and anchor for his sizeable family.

Chris is survived by his sons, Brian (Alexandra), Wayne (Diana), and Kirk (Lori); eleven grandchildren and nineteen great-grandchildren. He was predeceased by his wife of 73 years, Nancy; sons Gordon and Kenneth; and one great-grandson.

Respecting Chris’s final wishes, a funeral service will not be held. The family will be holding a private gathering at a future date. Condolences, memories and photos may be shared and viewed here. We were lucky to have him with us for so long. Part of the reason for that longevity was the excellent care he received at Chinook Care Centre, where he lived for the past 3 1/2 years. The family can’t thank them enough.

Share Your Memory of
Bernhardt
Upload Your Memory View All Memories
Be the first to upload a memory!
Share A Memory
Send Flowers