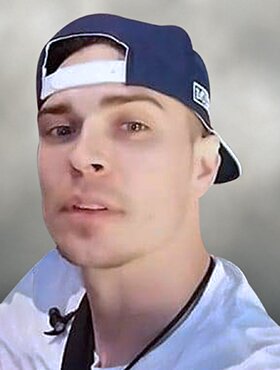 Stephen was born to Aline Westfall (nee Dugas) and Cary Westfall on July 19, 1988 in North York, Ontario. Moving to Alberta in his early years, Stephen always kept the Toronto area and the memories that he made very close to his heart.

Stephen enjoyed comedy, rap, the outdoors and ice cream with way too much candy on top. He excelled at writing, construction and making people laugh. He quickly became a friend to everybody he met and enjoyed helping others in times of need. If you knew him well or barely at all, he always left you thinking. Whether it was about how absolutely handsome, ridiculously funny, or just downright inappropriate he was sometimes, he left his mark.

It would be wrong to say that Stephen lost his battle because he never stopped fighting. No matter how sick he was, he was always determined. When anyone else would have broken, Stephen stayed strong. Through him, we know what resilience and perseverance truly look like. There was no quit in Stephen. The way he died is just like he lived: he wrote his own rules, he fought authority and he paved his own way. And if you said he couldn’t do it, he’d make sure he could.

He will continue to stay with us all through memories, and the laughs he forced us all to endure whether we were in the mood for it or not. We will see him everywhere. XXL T-shirt’s, uneven haircuts, and anytime you hear anything related to one of his many hobbies and obsessions.

Sorrowfully missed by all who knew him, especially his wife, Montana Westfall; his son, Rylan Westfall; his parents, Cary and Aline Westfall; his brother whom he worshipped, Chris Westfall and his niece Brooklyn of Toronto, Ontario; paternal grandmother Pat Westfall; his step-father Randy Reynolds; step-siblings Cassandra and Ryan Reynolds, and a host of loving in-laws, cousins and friends that he made throughout his journey.

Condolences, memories and photos may be shared and viewed with his family online here or through Facebook. A celebration of Stephen’s life will be held at Dixon’s Public House, 15425 Bannister Road SE, in Calgary Alberta on Tuesday, September 21, 2021 commencing at 5:00 p.m. The family would like to thank everyone for their kind words and generous donations during this difficult time. We know that he is without pain and is now at rest in God’s arms.