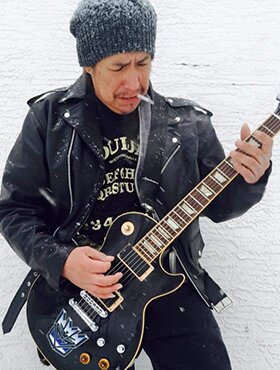 It is with great sadness that we announce the sudden passing of our beloved brother, uncle, cousin, nephew and good friend Hayden Clarence Orlando Cecil, on Monday, September 13, 2021 at the age of 47 years.

Hayden was a humble, kind, honest, giving and caring person.  He was a joker. He had a wicked sense of humor and had a very contagious laugh. He would joke around with anyone he came across with.

Hayden was the oldest grandson of Lorna and Wilfred Mark.

He had a strong passion for music. He played the drums, bass, but his main love in life was his guitars, those were his babies. He would just sit in his room and play on his guitar. Sometime bring out his acoustic and sit out on the patio just strumming on his guitar and singing. He had a love for Nirvana.  Kurt Cobain was one of his idols. He started playing guitar at the age of seven. In his teen years, with his cousin, they started a band and after that he would play with whoever wanted to jam. He loved his family dearly.

Hayden will be sadly missed by all who knew him.

Hayden is survived by his sister Korol (Adam); special nieces, Neve (Elijah) and Kylie (Brody); and special nephews, Nicholas, Aiden, Fieldy and Roman. We apologize if we have missed anyone

Hayden and Ian's memorial card can be viewed using this link

Share Your Memory of
Hayden
Upload Your Memory View All Memories
Be the first to upload a memory!
Share A Memory
Send Flowers