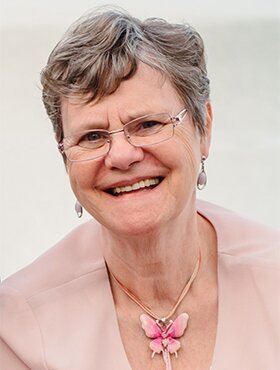 Dorothy was born Dorothy Elizabeth Erickson on December 30, 1948, the second child of eight children to Wilfrid and Mary Erickson. She resided in the small rustic, northern community of Summit Lake, B.C. She lived completely “off the grid” with no electricity or indoor running water, and no other comforts as we would know them today. Her early education was experienced in a one room country school, heated with wood and lit by natural light through pane glass windows.

Taking a giant leap of faith out of her comfort zone, Dorothy continued her education at Ambassador University in Pasadena, California. A few years later, she married Al and they embarked on a life of ministry in many Canadian provinces and cities.

Dorothy spent much of her marriage doing volunteer work in the ministry and service field, all while bringing up her children as well as helping bring up other people’s children by operating a day home. She also boarded numerous college students over the years.

In 2007, Dorothy was the first woman ordained into the ministry in the Grace Communion Church. In that role, she organized and attended women’s retreats in many Canadian cities and officiated weddings and funerals. She was a volunteer hospital Chaplain in St Albert and the beloved Chaplain at Caleb Manor in Edmonton.

One of the highlights of her career in service was a trip to Zimbabwe, Africa, where she and three other women attended and participated in a retreat for women from Zimbabwe, Zambia and Melawi.

Dorothy also was a valuable part-time care giver for her parents in their later years, leaving her own home and returning to Summit Lake to be with them when the full-time care givers had their annual vacation.

Dorothy’s heart and capacity for loving people, especially the vulnerable and less fortunate, is legendary. She gave her all and lived more life in her 72 years than many people do. A Good and Faithful servant who truly deserved to hear the words “well done”. She will be missed beyond words by those who loved her, and that most certainly is everyone who knew her.