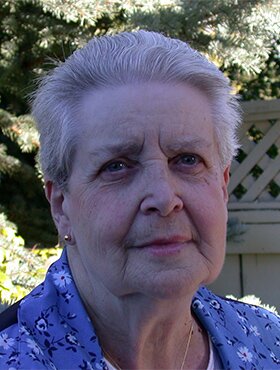 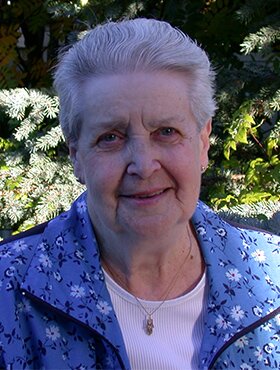 Vera was born in Carmangay, Alberta. Her family homesteaded nearby until her father’s illness and death in 1932 when they moved into town. In 1938, they moved to Calgary where Vera spent her teen years. In 1943, she moved to Winnipeg where she worked as a nanny and housekeeper, raising Richard Shaw through his childhood. They formed a close bond and kept in touch through the years until his passing.

In 1958/9 Vera returned to Calgary. With her amiable personality and striking looks, she struck up a romantic relationship with Rudolf (Rudy) Macks, who fathered her only daughter, Linda Anne.

She was employed with Motor Car Supply, and in 1967 went to work for Canfilm Screen Services where she handled the bookkeeping, eventually running the new computers installed in the 1970’s. She retired from office work in the early 1980’s when Canfilm closed.

Vera was one of the founding members of the Jubilee Housing Cooperative, where she lived from 1979 to 2012, serving most of those years on the executive. She loved her home dearly and tended to her pots of annuals on her private patio and garden beds filled with roses and perennials.

In 2012 Vera moved to Trinity Lodge and enjoyed her time there with new friends. After a fall in late 2015, she moved to Southwood Care Centre, and subsequently Providence Care Centre in 2018. In all locations, she was warmly received by caregivers who enjoyed her humour and positive outlook in life.

Vera enjoyed handicrafts throughout her life. In retirement, she was an earnest knitter and needlework stitcher. Many friends and family have her sweaters, socks, petit point and needlepoint pictures, and beloved Christmas socks.

Caring for children - family or otherwise - repeated in cycles throughout Vera’s life, and her loving manner, attentiveness, and guiding parental style created life-long bonds of love and devotion. Vera leaves behind her daughter, Linda Goh; son-in-law, Frank Goh; and grandchildren, Tiffany, Alexander, and Zachary Goh. She was predeceased by her parents, Nora and George Clark; brothers Charles, Roy, and Floyd; sister Estelle; and many beloved pet companions.

Despite loving plants, Vera was never one to enjoy funeral floral arrangements. To remember her, we ask you add a plant to your own piece of paradise. Think of her when you tend it, and how she never complained or reflected on the hardships and losses that came with her life, but instead kept her humour and love of life throughout.

Share Your Memory of
Vera
Upload Your Memory View All Memories
Be the first to upload a memory!
Share A Memory
Send Flowers