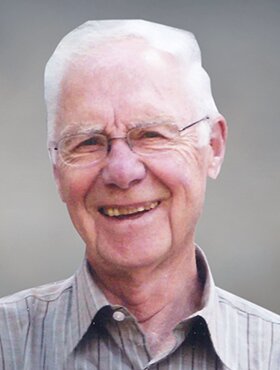 Morley’s life of 90 years encompassed many accomplishments. Highlights include; performer on the violin at the age of 6 as a member of the Mount Royal College Conservatory of Music in the Only Canadian Baby Symphony Orchestra, earning his degree on the violin during his Grade 12 year at Crescent Heights High School, holder of the Licentiate Royal Schools of Music, performer on the violin, member of the Calgary Symphony, the Calgary Philharmonic Orchestra, trumpet player for The Calgary Stampede and the Ice Capades, performer and adjudicator for the Order of the Eastern Star Children’s Festival, member of Calgary Concert Band, and the RCAF Calgary Air Force Band, conductor of  the first CBE school band to play in the Calgary Stampede Parade, holder of several degrees, including Bachelor of Education from the University of Alberta, Master of Industrial Arts and Master of Education from Oregon State University, Journeyman Carpenter, SAIT instructor, Calgary Board of Education teacher of Band and Wood Shop at Victoria and Balmoral Schools. Morley taught AMA driving lessons where he met his wife, Marion. As Morley’s teaching career continued, he taught Band and Industrial Arts at James Fowler High School, became the Provincial Supervisor of Industrial Arts for the Alberta Department of Education, Principal of Ernest Manning High School, Area Superintendent, and Superintendent of Human Resources for the Calgary Board of Education.

Morley was a direct descendent of Missionary Reverends George and John McDougall and has been involved with many aspects of the Historic McDougall Memorial United Church which was originally built in 1875 prior to Alberta becoming a province. He always enjoyed meeting and getting to know others at the site.

Morley was a member of the King George Lodge No. 59, the Bow Valley Chapter No. 5 of the Order of the Eastern Star, and the McDougall Stoney Mission Society. He was also a Trustee and governing elder of Central United Church. His volunteer work included committee work for Central United Church, Heritage Park, and the 1988 Winter Olympics, assisting with creative educational programs for CBE students. Post-retirement he was the Bow Valley Representative for Maillot Homes.

Morley received many accolades for his outstanding leadership and contributions. He enjoyed travelling and always made time to plan vacations with his extended family, including being together on many cruises.

Besides his loving wife Marion of 63 years, Morley is survived by his three children Kevin (Bonnie), Karen, and Brenda (Kent); grandchildren Tamara (Gregory), Sean (Kristen), Katrina (Gregory), Hayley and Erin; and great grandchild Isla. Morley was predeceased by his parents Irene and Morley Millward, as well as his brother Gerald Millward.

He stood out with a life of achievements, and love for all. Morley was a very special person.

Graveside Services will be held at Union Cemetery (Cemetery Road and Spiller Road. S.E., Calgary, AB), on Friday, October 8, 2021 at 2:00 p.m. Feel free to bring a chair if you need it. Condolences, memories and photos may be shared and viewed on Morley’s obituary at www.McInnisandHolloway.com.

Morley's memorial card can be viewed using this link

Share Your Memory of
Morley
Upload Your Memory View All Memories
Be the first to upload a memory!
Share A Memory
Send Flowers