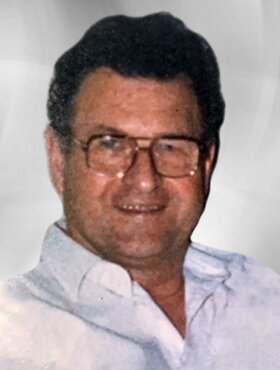 It is with sad hearts that we announce the passing of John Schuh of Calgary, AB at the Foothills Medical Centre on Sunday, October 10, 2021 at the age of 94 years.

Jack was born in Eatonia, SK on September 8, 1927 and grew up on the family farm south of La Porte. As a young man he was very adventurous, fixing and riding old military motorcycles and old cars. He later became interested in flying and in the late forties, he traded a car for an airplane, “Rudolph”, and became a “Flying Farmer”. He joined the Saskatchewan Flying Farmers in the early fifties and started a long passion for aviation that influenced many people to follow in his footsteps. When he wasn’t farming or flying, he ran a distributing business in Saskatoon and a coin laundry in Drumheller. Jack met the love of his life Patricia at a church dance in Calgary and was swept away. They were married on November 21, 1953 and pulled a travel trailer behind a 1952 Chevrolet to Florida for their honeymoon. Jack was a member of the Eatonia’s Lion’s Club an original member of the Calgary Winter Club where he enjoyed curling and many other activities with his family. Jack had a passion for eating and love family get-togethers for the big meals and ice cream. He was very creative when it came to cooking breakfast omelettes! In recent years, health issues took away his mobility but he kept his wits and appetite until the final days. Of all of Jack’s accomplishments he was most proud of his family, and he deeply cared about their lives. He will always be remembered for his storytelling and will be greatly miss by all his family and friends.

Funeral Services will be held at McINNIS & HOLLOWAY (Chapel Of The Bells, 2720 Centre Street North, Calgary, AB), on Saturday, October 16, 2021 at 10:00 a.m. A Private Graveside Service to follow. Those attending will be asked to confirm one of the following, (A) COVID vaccination (date requested), OR (B) a negative COVID test (within 72 hours), OR (C) Medical exemption AND valid government identification (with name & date of birth) OR (D) Under 12 years of age. Family and friends who are unable to attend in person are invited to join John's service streamed live (see below) on the day of the service. Condolences, memories and photos can also be shared and viewed here.If friends so desire, memorial tributes may be made in Jack’s name directly to the Mount Royal Aviation Scholarship Fund, www.mru.ca/JackSchuh. Condolences, memories and photos may be shared and viewed here.

The family would like to thank the staff on unit 42 at the Foothills Medical Centre for their care and compassion in making his last days comfortable.