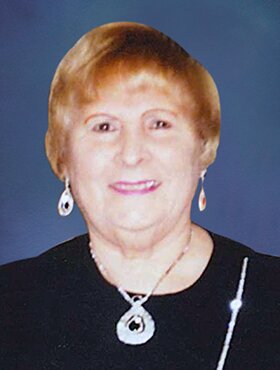 May was born in Westham, England on September 18, 1926.  She and her beloved husband, James (Jim) Gannon, married on September 15, 1945, and continued to reside in England, where she raised her family.  May and Jim moved to Canada in 1979, where May then worked for Hull Homes.  May enjoyed travel, the casino, a good meal and any amount of time spent with family, friends and her grandchildren.  May was an amazingly loving and generous wife, mother, and grandmother.

May is survived by her three daughters and two sons-in-law, Jackie and Davie Watkins of Melbourne, Australia, Marilyn Gannon of Edmonton, AB, and Tracey and Troy Straw of Calgary, AB; one son and two daughters-in-law, Raymond and Willy Gannon of Okotoks, AB, and Jeannie Gannon of London, England; seven grandchildren, Karen, Donna, Michelle, Aronlee, Rebecca, Calum, and Chloe; and three great-grandchildren, Harley, Liam, and Makayla.

May was predeceased by her husband James Gannon, and son Vernon Gannon.

A private graveside service will be held. Condolences, memories and photos can also be shared and viewed here.

Share Your Memory of
Matilda
Upload Your Memory View All Memories
Be the first to upload a memory!