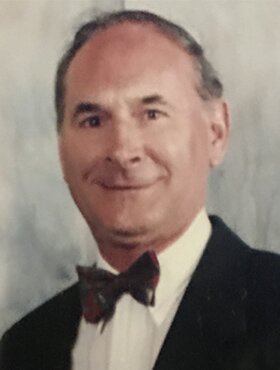 It is with great sadness that the family of Kenneth (Ken) Eastham announce his passing on Monday, November 22, 2021, at the age of 86.

Ken was raised in Blackburn, England with his three brothers, Brian, Derek, and Robert (Bob), with whom he was very close. He apprenticed as an electrician in Blackburn and was sent on military duty to Hong Kong for two years.  Ken and his family immigrated to Calgary in 1974 where he enjoyed working for Carewest supervising many building projects in their group of hospitals.  He will be fondly remembered by his six grandchildren who totally adored him and his sense of humour, storytelling, and zest for life.  Never one to stay still, he had many hobbies, including: refereeing soccer, curling, cross country skiing and golfing.  He was never far from his wife’s side and they loved to ballroom dance often dancing the night away. He and Kathleen shared many memories travelling the world which included cruises and many years of month-long trips to California with friends from Canada and the U.S. playing golf.   He had a love for planes and was a member of the Calgary Radio Control Soaring Society. He built hundreds of model planes.  He owned and flew an ultra-light plane for many years but was grounded when Kathleen deemed it too dangerous.  Not one to stay still, he sold the ultralight and took up golf.  He joined Redwood Meadows golf club where he played for 25 years until this year.  He enthusiastically participated in interclub and club championships, three years ago placed third in the senior club championship at the age 83!  His enthusiasm for life will be sorely missed.

Ken is survived by his loving wife of 62 years, Kathleen; and his sons, David (Ruthanne) and Graham (Heidi), of whom he was very proud; and his six grandchildren, Amanda (Adrian), Christian (Natalie), Sarah (James), Dana, Christine and Michael; as well as his six great-grandchildren, Nora, Vada, Kaia, James, Patrick and Ava.  Ken is also survived by his brothers Derek (Sandra) and Brian in England.  Ken was predeceased by his parents Margaret and William (Bill) and youngest brother Robert (Bob).

Funeral Services will be held at McInnis & Holloway (Fish Creek, 14441 Bannister Road SE, Calgary, AB) on Sunday, November 28, 2021 at 2:00 p.m. Reception to follow in the Hospitality Centre at the Funeral Home. Those attending will be asked to provide valid government identification (with name and date of birth) AND confirm one of the following: (A)Provincial vaccine record with QR code (paper or digital); OR (B)negative COVID test (within 72 hours); or (C)valid medical exemption (signed letter); OR (D)under 12 years of age. Family and friends who are unable to attend in person are invited to join Mr. Eastham’s service streamed live below on the day of the service. For those who are unable to view live, a recording of the service will be posted. Condolences, memories and photos may be shared and viewed on Ken’s obituary at www.McInnisandHolloway.com.