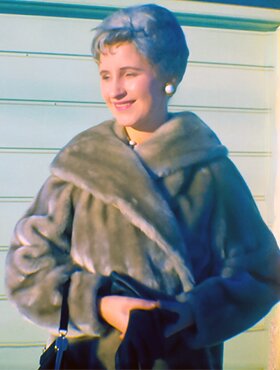 June was born in Scunthorpe, Humberside, England, on June 30, 1939.  She immigrated to Canada in 1955, at the age of sixteen and arrived in Quebec, Canada.  Later she worked in Toronto, ON, until she made her way to Edmonton, AB, where she met her future husband, Eugene Nicholas Luhowy.  June married Eugene in 1961.  Despite her British birth, and while retaining a hint of a British accent throughout her life in Canada, June was lovingly known as “Baba”, per her request, by her granddaughter.  June had embraced her British-by-birth heritage, and the Ukrainian heritage that she married into.  She will be most remembered for her with wit, laughter, and gift-of-gab.

June is survived by her daughter, Julie Luhowy of Sherwood Park, AB, and her son and daughter-in-law, Adrian and Pamela Luhowy, as well as her granddaughter Alexa Luhowy of Calgary, AB.

June was predeceased by her husband Eugene Nicholas Luhowy, and her sisters Brenda Hunt and Betty Wrack.

Share Your Memory of
June
Upload Your Memory View All Memories
Be the first to upload a memory!