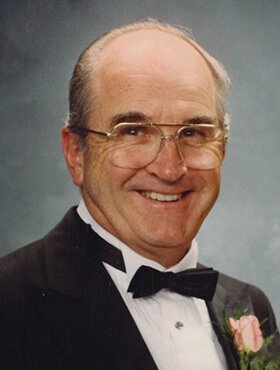 Pat Ryan, beloved dad, and grandpa, passed away on Thursday, January 13, 2022, at the age of 90. He was born in Ardath, Saskatchewan, to Beatrice and John Ryan and was the youngest of five children.

Pat met the love of his life, Muriel, in the same bowling league in Regina. Rumour has it that Muriel would consistently whip his butt in bowling. They were married on October 15, 1955, and together they raised five children.

Pat started his career as a banker, and then proceeded to work in Oil and Gas for several years. They moved to Calgary in 1963, where he discovered the wonderful community of Triwood and their life long best friends. Pat became President of Triwood Community Association from 1966-68 and again in 1970-71. Pat was most proud of getting the first community-built arena in Calgary to Triwood.

Pat loved coaching hockey and by all reports, the players loved Pat. “A Triwood legend and one of the really good guys for sure. He was a great coach, but he taught many of us so much more off the ice. Pat was a real positive influence too so many” and “He coached me more importantly off the ice…a great man”.

Pat served many years in Rotary Club and never missed a meeting. He was a long-time supporter of the Calgary Stampeders. Everyone knew to never book an important event on game day because he would never miss a game for any reason. Pat’s call to community service took him to another level in the 70’s. He served the City of Calgary as an Alderman from 1974-1980. This is where Pat thrived, and no one was more dedicated or worked harder than him. His legacies are numerous and remain relevant to the citizens of Calgary today. Whenever you walk your dog in Nose Hill Park, say a silent thank you to the man who ensured the land was secure from developers and for you to enjoy the vast nature within the city limits. While sitting in a bar or restaurant, raise your glass to toast Pat for “winning round one in his fight for clean air in public buildings” and for being instrumental in getting the non-smoking bylaw conversation going. While riding the LRT, breezing through traffic, think of Pat who was part of the committee who made it happen. Pat was always ahead of his time with his progressive ideas and never blinked or wavered when challenged.

Pat was predeceased by his beautiful wife Muriel, and his mini-me son Kirk.

Pat will always be remembered for his quick wit, sense of humour and the love of his family and his community. He will be missed in more ways than one.

Due to Covid, no funeral services will be held at this time. Condolences, memories, and photos may be shared and viewed here.

The family would like to extend their deepest gratitude to Bow-Crest Care Centre for the loving care of Pat during his brief stay with them.

Share Your Memory of
Pat
Upload Your Memory View All Memories
Be the first to upload a memory!
Share A Memory
Send Flowers