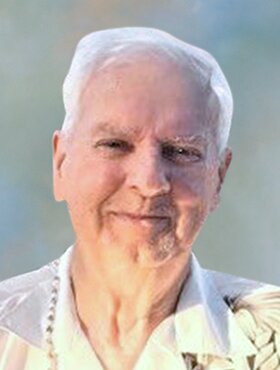 It is with heavy hearts that we announce the passing of Daniel McDade Law on Wednesday, February 23, 2022 in Calgary, Alberta. He died peacefully in his 87th year, having lived a fruitful life as a proud and attentive husband, father, grandfather, brother, and uncle.

Danny, as he was affectionately known, was born July 28, 1935, in Clydebank, Scotland, the third child of Henry and Annie (nee McColl), where he grew up. He and the family escaped harm during the Luftwaffe bombing of the family home during the Clydebank Blitz of March 1941, after which he was temporarily billeted in nearby Helensborough.

Danny’s apprenticeship commencing in June 1951 with the Royal Ordnance Factory in Dalmuir, then Capenhurst, qualified him as an instrument technician. He then entered service at RAF Bawdsey, Suffolk with Fighter Command from 1957-59, as a Senior Air Craftsman radar technician. There he met his future bride, Senior Air Crafts Woman radar operator Sheila Brett. They were married in September 1960 in Uckfield, East Sussex. They settled in Harwell, Oxfordshire, where Danny worked as an instrumentation technician for the UK Atomic Energy Authority, further earning his technologist certificate.

They relocated to Clydebank in Scotland in 1966 where Danny worked with Babcock & Wilcox Engineering in nearby Renfrew as an instrument engineer.

Seeing greater opportunities in Canada for his young family, Danny moved overseas to find work, first stopping in Uranium City before settling in Fort McMurray in 1967. Sheila and their two young sons joined him, and their third son was born the following year. Danny began work with Great Canadian Oil Sands (now Suncor) where he enjoyed a long career, retiring in 1993 as Construction Project Coordinator.

Danny was a very active member of his adopted community. He served on the MacDonald Island Park Society, helping to bring recreational facilities to MacDonald Island in the 1970s. He was a long-time member of the Cosmopolitan Club, flipping pancakes for Canada Days and the Blueberry Festival and spearheading many community projects. He was elected to the Catholic School Board, serving three terms including two as chair and was also an active member of the local curling club, golf club and the Robert Burns society. Although never having played the game he learned to skate and coached his sons in minor hockey. Danny was a member of the Royal Canadian Legion for 40 years. Going anywhere in town with Danny those days usually meant a lengthy commitment, as he would invariably end up chatting with so many acquaintances.

Following retirement, Danny and Sheila relocated to Sylvan Lake, Alberta in 1997. There he remained active in the community by joining the Citizens On Patrol Society, seeing old friends and making new ones. Danny and Sheila then moved to Calgary in 2013, where they were able to spend more time with their granddaughters.

Danny is survived by Sheila, his wife of over 61 years, his sons Graham (Emily McLaughlin), Steven, and Allan (Tara); five grandchildren: Sarah and Kate (Calgary), Ethan and Thomas (Ottawa), and Masyn (London, UK); and his youngest brother Jim (Uddingston, UK). Danny was predeceased by his siblings Harry, Graham, David, and Margaret (Ross); and nieces Karen Law and Marianne Law.

We would like to thank the staff at Brentwood Care Centre for their care and assistance this past year.

A Celebration of Life will be held at McInnis & Holloway (Crowfoot, 82 Crowfoot Circle NW, Calgary, AB), on Saturday, May 7, 2022 at 2:00 p.m. Reception to follow in the Hospitality Cenre at the Funeral Home. Family and friends who are unable to attend in person are invited to join Mr. Law's service streamed live on the day of ther service (see below). Condolences, memories and photos can also be shared and viewed here.

Daniel's Memorial Card can be viewed by clicking here

Share Your Memory of
Daniel (Danny)
Upload Your Memory View All Memories
Be the first to upload a memory!
Share A Memory
Send Flowers