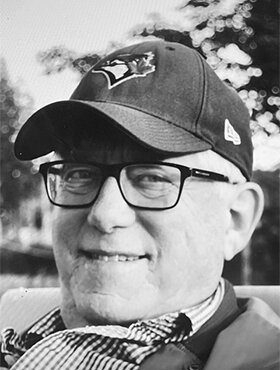 Some journalists called him “prophet in a baseball cap,” others dubbed him a controversial Christian. The Very Reverend Dr William Phipps, outspoken advocate for Earth and human rights, died peacefully at home on March 4, 2022.

William Frederick Allan Phipps was born in Toronto May 4, 1942, the son of Cora Stinson and Reginald Phipps, and brother of Elda. He had a middle-class Toronto upbringing, and he seized every opportunity to grow and learn throughout his life.

Bill graduated from Osgoode Law School in1965, from McCormick Theological Seminary, Chicago in 1968 and was ordained by The United Church of Canada in 1969. He used his law degree to help establish the first poverty law office in Canada, but the call of the church became stronger. He served as minister at Thorncliffe United and Trinity-St. Paul’s United in Toronto, establishing a reputation for bold leadership in the areas of LGBTQ rights, peace, poverty, and homelessness.

In 1986 he moved to Edmonton to work in church administration, and there, opportunities to learn from Indigenous peoples arose. He attended The Dene National Assembly in 1987, supported the Lubicon Cree, and travelled the Mackenzie/Dehcho Valley.

In 1993, Bill moved to Calgary to become minister at Scarboro United. His work continued to bridge the church and the world. Well into his retirement, he represented the church nationally and internationally in places of conflict, such as The Philippines, Central America, Middle East, Congo, Sudan, and East Timor.

When Bill was elected 36th Moderator of The United Church of Canada in 1997, The Ottawa Citizen published a scathing editorial and subsequent interview criticizing his views on the ordination of gays, Indigenous peoples, economic justice and theology. Bill’s responses prompted national conversations and hundreds of interviews about the nature of Jesus, the role of the church in society and a moral economy. Some called him saint; others heretic.

In 1998, on behalf of The United Church, Bill issued the first Canadian Apology to First Nations survivors, their families and communities for the harms done by the church at the 13 residential schools the church helped run. He returned to congregational ministry in 2000, ran for the NDP in 2002, authored Cause for Hope and retired in 2007. He never stopped working, particularly on the climate crisis around which he brought people together in workshops across Canada.

Bill loved paddling Algonquin Park, camping, especially on Lake Superior, in the Rockies and Haida Gwaii. He enjoyed a good laugh, too. When covid struck, he and Carolyn made YouTube videos, such as, Camping with Old People. He was a great Toronto Blue Jays fan, attended their first game in 1977 and in August 2000 he was delighted to throw out the first pitch.

He leaves his beloved wife Carolyn Pogue, their children, Sarah Phipps (Don Chong) of Toronto, Jeremy Phipps (Jodi) of Winnipeg and Andrea Czarnecki (Blair Van Metre) of Yellowknife, his sister Elda Thomas of Toronto, as well as family and friends far and wide.

An online funeral will be hosted by Hillhurst United at www.hillhurstunited.com on Tuesday, March 8, 2022, at 1:00 p.m. MST. Donations may be made to The United Church of Canada marked “for climate justice.”