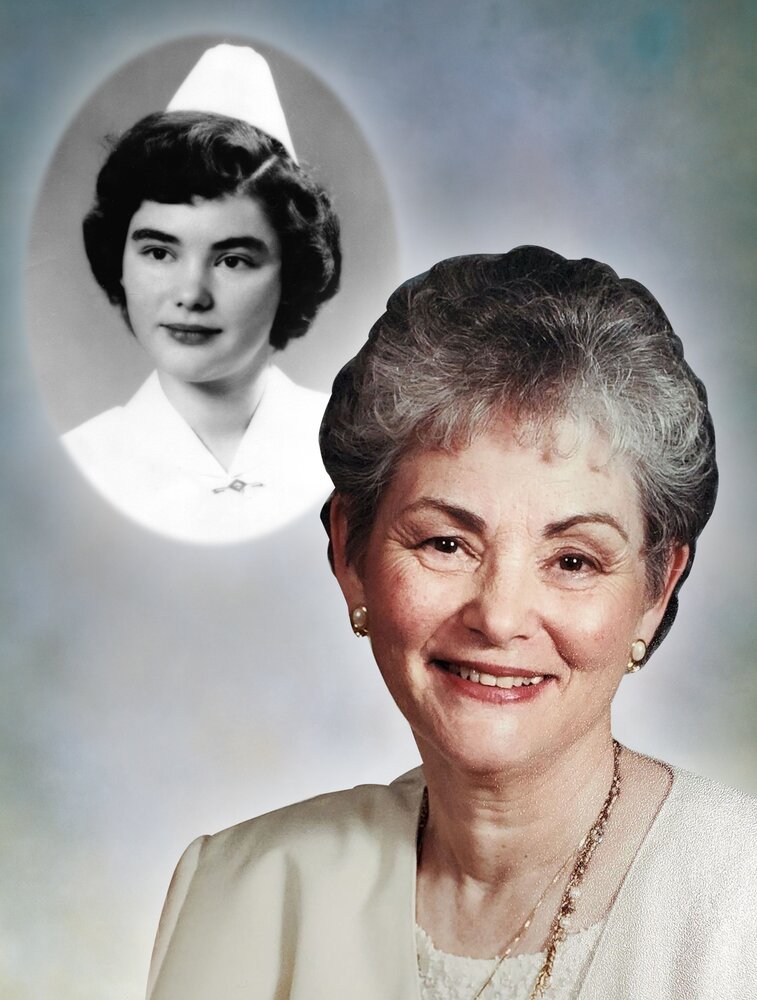 It is with very sad hearts that we announce the passing of Dorothy Agnes Durant (nee Fisk) with family by her side on Wednesday, April 13, 2022.

Dorothy was born and raised in Waterloo, Quebec, the only surviving child of Florence (nee Tebby) and Charles Fisk.   She graduated from Waterloo High School in 1953 as the valedictorian of her class and with her name on the Honour Roll. During her high school years and following, Dorothy worked part time to help support her family until she was old enough to enter nursing at the Montreal General Hospital.   She graduated as a Registered Nurse in 1958 and went on to have a rewarding career working in obstetrics and later in management of a medical facility.

Always active in the church, Dorothy met her future husband Gerry through the United Church Youth Group. They married in 1959 and settled in Ottawa.   Their first child David arrived in 1960 with Joanne arriving in 1964.  The family was not quite complete though until Barb joined them in 1973.

While Dorothy herself came from a small family, Gerry most certainly did not.  There were many wonderful large family gatherings over the years, and they were always at Dorothy and Gerry’s home. Christmases were particularly special and often included old friends and some very new friends who would otherwise have found themselves alone for the holiday.  As Dave, Barb and Joanne grew, Dorothy’s ‘family’ extended well beyond just her own three children to include many of their friends as well.

Dorothy loved spending time with her family and friends.   She also enjoyed spending her time reading, gardening or enjoying the company of the various pets who were fortunate enough to find their home with Dorothy over the years.   While Dorothy played both basketball and tennis growing up, her true passion was baseball.   She loved to go to Jarry Park to watch the Expos play and once the Blue Jays arrived on the scene, she enjoyed trips to Dunedin to watch spring training games as well as to Toronto to watch the Jays play, both at Exhibition Stadium and then the Skydome.  One of Dorothy’s fondest memories was the surprise trip that Dave took her on before her move to Calgary.  Dorothy was told to show up with a suitcase and her passport and off they went to watch games at Fenway Park and Yankee Stadium.   Her smile was a mile wide when she shared stories of that trip.

While Dorothy was quiet and somewhat shy, she was also extremely intelligent, quick-witted and always had wise and practical advice to provide when asked to share her thoughts.  She was a great listener, fiercely independent and incredibly strong.  She also surprised her grandsons during a trip to Hawaii one year by being crowned “Beer Pong Champion.”  They were all quite proud to announce that their Nana had beaten them all at beer pong, likely because she wasn’t drinking the beer.

The family would like to offer their profound thanks to the nurses and staff at Newport Harbour Care Facility who have provided such incredibly kind care to Dorothy over the last two years.  A special thank you to Rosie, Dorothy’s companion and friend for the last several months of her life.

While Dorothy had been living in Calgary at the time of her passing, her home for over 50 years was Ottawa.   A Celebration of Dorothy’s Life will take place in Ottawa on Saturday, May 21, 2022 at 11:00 a.m. at Hulse, Playfair and McGarry - West Chapel (150 Woodroffe Ave, Ottawa, ON).  For those who are unable to attend in person, they are invited to join the service streamed live at https://view.oneroomstreaming.com/authorise.php?k=1652982189185129.  If friends so desire, memorial tributes may be made directly to Parkdale United Church, Ottawa, or to a charity of the donor’s choice. Condolences, memories, and photos may be shared and viewed here.