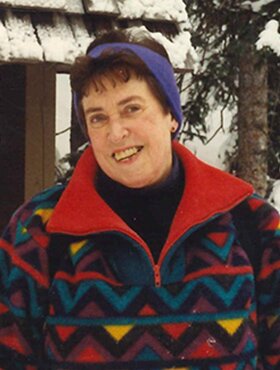 Peggy grew up in Vermilion, Alberta, she told lots of stories about her uncle that had a theatre and that he bought the first car in the town.

Peggy moved to British Columbia after College in Brandon, Manitoba and Seattle, Washington to work at B.C. Forest Products Ltd. While she was there a Scotsman named George, who worked on the railway with her father fell in love with her portrait. He told all his friends that he would marry “beautiful Peggy with the raven black hair.” Resistance was futile and within three days of meeting him, she had a ring on her finger and their adventures began. They lived in Edmonton, Alberta, North Battleford, Saskatchewan and Trail, British Columbia before settling in Calgary, Alberta. They built a house with a mountain view and spent most summer weekends in Banff or Radium. They loved to travel and hauled a trailer all over British Columbia and Western USA. They also were fortunate to spend a lot of time in Hawaii. George passed in September 1978, and she continued to travel to Radium in the summer long after he passed. She met her second husband Bill and married him in 1984, once again a short courtship. Bill also loved to travel, and they spent a lot of time travelling across Canada and the USA. Sadly, she was widowed a second time in 1988. She continued to travel with friends to the East Coast. She and another friend went to Australia, they both had family to visit and saw a lot of the East Coast.

She was a member of the Legion in Cochrane, Alberta and volunteered with the Alberta High School Rodeo Association and travelled a lot to see two of her granddaughters, Kelly and Nikki, participating in Rodeos in Alberta and in the USA. She never missed a Christmas Eve and Christmas Day with her other two granddaughters, Jessica and Carrie, and spent lots of time in Radium with all of them. She was a member of numerous groups through the Kirby Centre in Calgary, AB.

There was always a special place in her heart and home for animals. She had many and varied four-footed companions; cats were her favourite, but a special skunk named Lavender was also a beloved family pet. She adopted and supported the Calgary Humane Society and was active writing letters supporting animal welfare.

Peggy was a world class archer who won numerous awards and would have been an Olympic contender had war not broken out. She was very proud of her archery and occasionally would bring out the bow. Once, to prove a point that there would be no peacock living in our back yard, she shot an arrow through the garage, it was never found. In her later years she was very active with skating, skiing, hiking, mountain biking and aquafit which she continued until her mid 80s when a ski accident and a skating fall caused her to slow down. She was an extraordinary knitter and seamstress and made lots of clothing for all of us and sewed some décor and accessories for a granddaughter’s wedding.

Peggy is predeceased by her husband, George Aikins in 1978 and her second husband, Bill in 1988, and one sister, Gene and her husband Stanley Manyluk. They are survived by their three children, Glen, Marilyn, and Dean; and their children, who live in Red Deer, Alberta, Denver, Colorado, Edmonton, Alberta, and other points west.