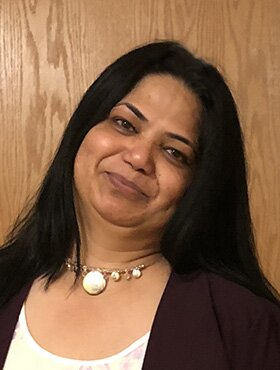 Anita Samson (Davidson), also known as Neeno by her loved ones, of Calgary, Alberta, passed away on Wednesday, April 20, 2022, at age 57.

Anita was born in Quetta, Pakistan, on September 27, 1964. She married Reginald in 1990. Anita was a woman who enjoyed the simplest pleasures in life by devoting herself to her husband and three children, Sarah, Juanita, and Abraham.

Anita was the top-scoring student in the entire province of Balochistan for both the Senior Cambridge Examinations and the Higher Secondary School (FSc Pre-Medical). She won a gold medal, was awarded a scholarship, and had the option of studying medicine at any university of her choice in Pakistan. She became one of the best physicians in Balochistan, but her greatest accomplishment was her faith and service to God. Following her salvation in September 1991, Anita became a devout Christian, regularly attended church, and shared the gospel with many. Throughout the years, Anita kept growing in her faith through daily prayer, Bible study, and worship.

Anita’s most memorable vacation was her trip to England and France to attend her daughter’s graduation in 2018.

Anita will be, remembered as a humble and caring woman. She never boasted her achievements but kept the gospel at the center of her life. Instead of seeking worldly possessions, she clothed herself in humility and derived her confidence from God. Anita didn’t speak a lot but was a woman of action and never gave up, no matter how challenging a situation became.

Anita is survived by her siblings Vincent and Sabita Davidson, as well as nieces, nephews, and in-laws.

Funeral Services will be held at McInnis & Holloway (Fish Creek, 14441 Bannister Road SE, Calgary, AB) on Monday, May 2, 2022, at 11:00 a.m. Graveside Service to follow at Prairie Sky Cemetery. Condolences, memories, and photos can also be shared and viewed here.

Share Your Memory of
Anita
Upload Your Memory View All Memories
Be the first to upload a memory!
Share A Memory
Send Flowers