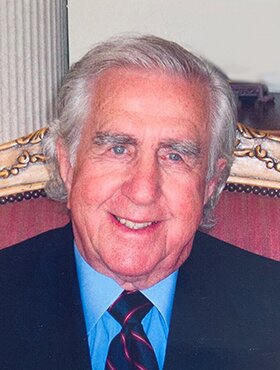 It is with profound sadness we announce the death of our beloved Keith Stephenson of Calgary, AB who has gone on to the “great graduation,” passing away on Thursday April 21, 2022 at the age of 94 years. Keith was lovingly held by his family as he went to his heavenly home.

Keith was born in Oxbow, SK on March 29, 1928. While he would live in Toronto, ON and Calgary AB, Keith was always a Saskatchewan boy at heart.

Keith was Vice President and Secretary of the Noxell Corporation (Noxzema and CoverGirl) for Canada. Joining Noxell as a junior accounting employee, Keith’s hard work and impressive drive took him the top of the company. In the late 1970s, he would harness the western spirit of entrepreneurship. He moved to Calgary and bought Sanitary Supplies and Food Equipment Ltd., a major industrial hospitality supplier. At Sanitary, Keith was known for not only his business acumen, but also the legendary parties he threw (especially the annual Stampede party), and for creating a family environment for all who worked there. Later Keith would own and operate the iconic Johnny Rockets Car Wash. He reluctantly retired in his early 80s, still wanting to contribute to the community.

Keith’s true joy came from his family and friends. He was a role model and inspiration to many, especially his daughter Mercedes. Keith was an original, “the most interesting man in the room,” stylish and charismatic. He exuded warmth, friendship, and compassion with his gentle smile. A genuine soul with no pretence.

Keith will be remembered for his intelligence, kindness, dignity and humour. His family will miss the frequent twinkle in his eye that would warn of an impending joke. Keith believed in always giving people a chance and was humble. He had a way of understanding others that made everyone feel comfortable and valued. He was the consummate gentleman and deeply respected.

Keith loved to plant beautiful gardens, listen to music (especially Johnny Cash) and to see the world, travelling into his 90s. He was an avid Calgary Flames fan who loved attending games. Keith believed in being an informed citizen and understanding the world around us. He never missed his daily newspapers or the evening national news.

A loving husband and father, Keith is survived by his wife Lynda (nee MacAulay) with whom he was about to celebrate 45 years of marriage, and daughters, Mercedes Stephenson of Ottawa, ON, and Debbie Holder (Ashley) of Calgary, AB; and grandchildren, Katie Wilchak (Kelly) and Cameron Holder (Jo) of Calgary, AB. Keith also leaves behind sisters-in-law, brothers-in-law, cousins, nieces, nephews and many friends who mourn him. Keith was predeceased by his daughter Jill Stephenson, and his dear brother, Ken Stephenson.

Keith was a direct descendant of The Mayflower, through his mother Ruby Pearl Stephenson (nee Doty). Known as “the Iron Man” for surviving stage 4 cancer in his late 80s and a stroke in his 90s, Keith was a fighter.

A Celebration of Keith’s Life will be announced at a later date. Condolences, memories, and photos may be shared and viewed here. If friends so desire, memorial tributes may be made directly to the Mustard Seed Street Ministry, 102 – 11 Avenue S.E., Calgary, AB T2G 0X5 Telephone: (403) 269-1319, www.theseed.ca, or Hope Mission, PO Box 85082, Calgary, AB, T2A 7R7, https://hopemission.com/donate/.

The Stephenson family would like to express their heartfelt gratitude to Dr. Ryan Lenz for his compassionate and excellent care, and to the best nurses and staff imaginable in Unit 94 at Rockyview Hospital, who cared for Keith like family when the unthinkable became the inevitable.