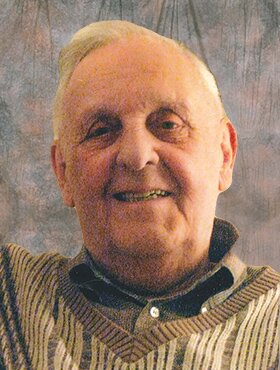 Ted was born in Winnipeg MB on May 4, 1925. At the age of eighteen Ted joined the war effort by enlisting in the Navy and serving on the HMS Nabob aircraft carrier.

He had a long, prosperous, and happy life, although failing health limited his activities during his last few years. By his side since 1949 was his wife, Stella. They met and married in St. Vital and, after time spent in Rosetown and Yorkton, SK, permanently settled in Calgary with their daughters, Leslie, Debbie and Kim. In Calgary Ted found his niche and an outlet for his artistic talents, designing business forms and in 1971 eventually joining in partnership to establish his own company, Pro Forms Ltd. Ted and Stella enjoyed travelling, dancing, Masquerade balls, socializing with friends, golfing, painting, building miniature doll houses and spending winters in Arizona.

Share Your Memory of
Ted
Upload Your Memory View All Memories
Be the first to upload a memory!
Share A Memory
Send Flowers