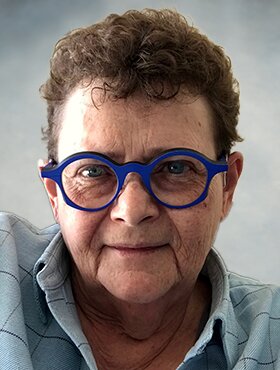 Jacqueline Stirling Page of Calgary, AB passed away on Tuesday, May 3, 2022 at the age of 68 years.

Jackie was born in Edmonton’s Royal Alex Hospital on November 15, 1953. Her adoptive family moved to Calgary within two weeks after her birth. She was baptized by a Presbyterian minister at the Rip Van Winkle Motel in Edmonton enroute to Calgary. Jackie liked to say that this accounted for her somewhat, lifelong sleepy demeanour and her ongoing struggle to become “woke”.

A congenital, bilateral, moderately severe hearing loss was her most significant challenge in life. This was largely overcome by a strong work ethic, and vocations requiring a high level of precision hand dexterity and eye coordination. Contact lens manufacturing, gold technology in dental labs, spanning a couple of decades, electronic assembly, QA in electronics and medical lab assisting, at CLS, comprised her work history, with no shortage of menial gigs to fill in the gaps.

She was mainstreamed and received her first viable hearing aid at the age of fourteen, and second at age twenty-one. She was very fearful of Bluetooth technology and brain hacking potential in the present technology. Her ears figuratively bled all her life, and sometimes literally. Severe dental malocclusion constricted her airways, accompanied by a dysfunctional TMJ, which left her facial muscles in chronic pain. Concise speech and thought was the gift that kept giving.

She worked with a vast array of carcinogenic substances through her working life. There was daily exposure to asbestos, heavy metals, benzene, etc. Fifty years of smoking seemed almost a moot point, and she knew that her terminal diagnosis was long overdue as a smoker. She owned her cancer.

A school trip by train to Expo 67 in Montreal shaped her lifelong appreciation for diversity. She saw the best of all nations, cultures, and creeds in a setting of peace and harmony in beautiful Montreal. She always felt a strong, indelible connection to the “Family of Man”, gifted to Calgary by the Brits. Jackie welcomed diversity, a global work force of marginalized, hardworking immigrants who have dreams. She shared the grief of communication barriers and the horrific stark reality of truly sick white boomers. A work experience in Northern Scotland at the Findhorn Foundation in the seventies further solidified her connection to diversity and nature. Sustainable methods of living within an international community of intent would serve as inspiration for her for decades.

Jackie believed reconciliation comes to us all – which to her meant to make sense of our lives, to honour our past and communicate our values. The end of life is but an illusion, just another development stage, most certainly no worse than puberty.

Her heartfelt thanks go to those who enriched her life: her family, friends, the late Mr. Gil Menzies, assistant principal of Ernest Manning High School, U of C Professor Emeritus, Dr. Nancy Dudley, deceased former Dean of U of C Social Welfare, Dr. Tim Tyler, coworkers, neighbours, the palliative care team, nurses, Nishma and Jasper, medical staff, and doctors. She also thanks Clinical Assistant, Resident Dr. Dalya, Dr. Russell Loftus, and Dr. Cynthia Card. To all of you she says “thank you.” A special thanks to an awesome woman, Carly Donnelly, my friend adjacent and agent, and to Rev. Brent Woodard, childhood family friend, who resides in Fairmont Hot Springs, BC.

Jackie was predeceased by her mother Ida Nicholas in 2017, brother John N. Page II in 2015, and father John N. Page I in 1965. She is survived by birth sister Sylvia; nieces, Trisha and Emilia, and numerous cousins by both birth and adoption throughout Canada and the United States. Long lost cousins, Warren (Nortel) and the late Larry Day (Pyramid Productions), the Wights, the Cains, the Coates and the Spencers. A pioneer family from Nebraska whose three brothers settled in Alberta and Saskatchewan. Her first ancestor on American shores was Thomas Wight, who settled in Dedham, Mass. In 1635, some fifteen years after the Mayflower.

No Funeral Service by Jackie’s request. A Graveside Service will be at the new Columbarium in High Rivers’ Highwood Cemetery. Condolences, memories, and photos can also be shared and viewed here.

If friends so desire, memorial tributes may be made directly to the Centre for Newcomers Society of Calgary, https://www.centrefornewcomers.ca/give, CUPS Calgary Society, https://www.cupscalgary.com/ways-to-give/donate-now, or Centre for Sexuality Society https://interland3.donorperfect.net/weblink/WebLink.aspx?name=E340759QE&id=7.

Share Your Memory of
Jackie
Upload Your Memory View All Memories
Be the first to upload a memory!
Share A Memory
Send Flowers