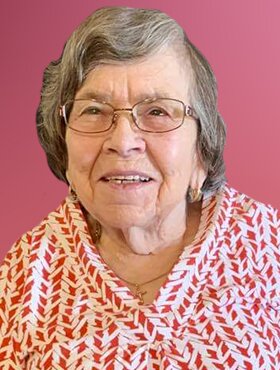 Jeannita was born in Moncton, NB on April 21,1931. Jeannita married Paul Thibodeau in 1952 and moved to Toronto, ON. She later moved with Paul to Kelowna, BC in 1990 to Retire. She was a member of the CWL and volunteered with Kiwanis Group. Jeannita accomplished much through her life and was particularly proud of all her children, grandchildren, and great-grandchildren. Jeannita enjoyed travelling around world, some trips included Greece, Europe, Caribbean, Mexico, and all-across North America. She will be most remembered for her storytelling of her past and her Acadian heritage.

Jeannita is survived by her two daughters, and son-in-law, Carol Ann, of Maple Ridge, BC, and Denise (Bill) of Kelowna, BC; two sons and two daughters-in-law, Michael (Kathy) of Calgary, AB, and Gary (Cindy) of Woodbridge, ON; twelve grandchildren, Tim, Tammy, David, Stephen, Crystal, Amy, Lisa, Paul, Krista, Dustin, Whitney, and Michelle; twelve great-grandchildren; Ashleigh, Hayleigh, Madison, Avery, Veda, Ryley, Ashley, Marley-Rose, Tucker, Edie, Wren, and Paiyton. Jeannita is also survived by her two brothers and two sisters-in-law, Roger (Cathy) of London, ON and Paul of Wellington, PEI; and her sister, Bernice of Mississauga, ON, (Marilyn of Ottawa, ON); as well as numerous nieces, nephews, cousins, and friends.

Jeannita was predeceased by her husband Paul, her parents Ernest and Flora; her brothers Edgar, Leo, and Laurie; and her sister, Ronalda.

Share Your Memory of
Jeannita
Upload Your Memory View All Memories
Be the first to upload a memory!
Share A Memory
Send Flowers