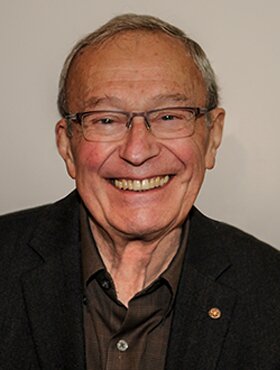 Walter Chayka, beloved husband of Gloria Chayka (nee Baziuk) of Calgary, AB passed away on Wednesday, May 4, 2022 at the age of 85 years.

Walter was born in Jasmin, SK on August 26, 1936, and was raised in Kelliher, SK, where he completed his early education. After graduation, Walter attended the University of Saskatchewan, completing a Bachelor of Commerce degree with honors. He found work joining Continental-Emsco Ltd, an oil field supply company in Virden, MB in 1956. He excelled in several field assignments in Western and Northern Canada before moving to Edmonton 1961 as the Manager of Stores. In 1977, Walter was appointed President and Chief Operating Officer of Continental-Emsco Canada, then, in 1988, he left for a new challenge to assume the role of President of the newly merged competitor National-Oilwell Canada Ltd. In 2000, Walter retired from the supply business and was drawn to a new opportunity as an associate with a business brokerage firm, the Lomax Group Inc.

Always active in the community, Walter was involved in many volunteer and service groups. Among them the Rotary Club of Calgary - Downtown, Medical Mercy Canada, Parks Foundation Calgary and several organizations related to learning disabilities. In addition to his community involvement, Walter loved and believed in people and their potential. He was a willing mentor, trusted counselor and champion in guiding people to succeed and flourish. Always willing to lend a hand, he was filled with excitement and curiosity learning about someone else's story. Logic and empathy were his guiding principles. He enjoyed the company of family and friends, especially when fine meals and wines were involved; the adventure of travel; the delight of learning; the freedom and camaraderie of skiing; the mountains; black coffee; jigsaw and crossword puzzles.  He prided himself on remaining vital and passionate well past 'retirement age', which most can tell you never really happened to Walter in the traditional sense of the word.

Besides Gloria, his loving wife of fifty-five years, Walter is survived by his son Michael (Cathy); brothers, Robert (Alice) and Orest; and nieces and nephews, Larissa (Tim), Christine, and John (Danielle).  Walter was predeceased by his parents, John and Maria, and younger brother Gerald.

A Celebration of Walter's Life will be held at McInnis & Holloway (Park Memorial, 5008 Elbow Drive SW Calgary, AB) on Wednesday, May 18, 2022 at 2:00 p.m. Reception to follow in the Hospitality Centre at the Funeral Home. Condolences, memories and photos can also be shared and viewed at www.McInnisandHolloway.com. If friends so desire, memorial tributes may be made directly to the Rotary Club of Calgary Downtown, specifically the Carl Smith Stay in School Program, (Local At-Risk Youth), https://rotaryclubofcalgary.org/page/donate PO Box 3040, Westbrook PO, Calgary AB T3C3W2, Telephone: (403) 398-9969, or a charity of your choice in support of the Ukraine.