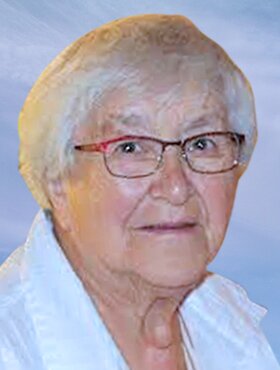 Sister Yvonne Grace McKinnon of the Sisters, Faithful Companions of Jesus, died peacefully on Tuesday, May 10, 2022 at the age of 89 years.

She was born in Ellscott, AB and never forgot the “blinking stars at night”. She was the youngest of six children, with her siblings being George, Ralph, Helen, Art and Ruth. They have all predeceased her. When she was five, she moved to Edmonton with her mother. She attended Grandin School, the FCJ Convent School and, in Grade four, she boarded at Assumption School in order to learn French. She spent Grades five to twelve at the FCJ Boarding School but greatly appreciated being at home with her mother and Ruth on weekends. Yvonne was very close to her family. In later years, her nieces, nephews and their families brought great joy to Yvonne’s life. She never forgot their birthdays.

In February 1950, she entered the FCJ Novitiate in Calgary and made her first vows there in August 1952. Sr. Yvonne spent six years in England, where she studied music and became a teacher. On returning to Canada in 1959, she taught in Toronto for one year and then moved to St. Joseph’s School in Coaldale, AB, where she taught and also led a children’s choir. 1970 saw her completing her B.Ed. at the U of A. She then returned to Coaldale for the next five years, before she went to Edmonton. There she was in two schools. In 1980, Sister taught in Toronto while following courses at St. Michael’s College as well as at St. Paul’s University in Ottawa.

Her next mission was as itinerant music teacher for three Toronto schools before she joined other FCJs at St. Mary’s High School in the inner city. There she taught Religion, English and Instrumental Music. Sr. Yvonne formed strong relationships with people with whom she lived and worked and maintained contact with a wide range until her death. In Toronto, she was a great support to Francisco and Loly Rico as they adjusted to life in Canada and became coordinators of what would become the FCJ Refugee Centre. After retiring in 1996, Yvonne trained for Pastoral Care and thoroughly enjoyed serving in hospitals in Toronto, Lethbridge and Edmonton. She moved to Sacred Heart Convent, Calgary in April 2021 and soon was volunteering at the Rockyview Hospital and in St. Mary’s Cathedral Parish.

In community, she did everything with tremendous dedication. Helping others was her forte. Companions in Mission and all who knew her are grateful for the joy she communicated. Everyone recalls Yvonne’s smiling face and twinkling eyes. Her family as well as all of her FCJ Sisters thank God for the gift that she was to all whose lives she touched. May she rest in peace.

Funeral Mass will be celebrated at Sacred Heart Convent (219 19 Ave SW, Calgary, AB) on Monday, May 16, 2022, at 10:30 a.m. Graveside Service to follow at St. Mary's Cemetery. Reception to follow at the Convent. Those who are unable to attend in person are invited to join Sister Yvonne’s Mass streamed live at www.MHFH.com. A recording of the service will be posted. Condolences, memories, and photos may also be shared and viewed there.

In living memory of Sister Yvonne McKinnon, a tree will be planted in the Ann & Sandy Cross Conservation.

Share Your Memory of
Sr Yvonne
Upload Your Memory View All Memories
Be the first to upload a memory!
Share A Memory
Send Flowers