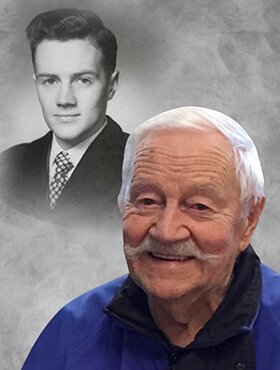 Ivor was born in Bentley, AB on August 26, 1928 and raised on a farm near Rimbey, AB. He completed studies at the Olds School of Agriculture prior to obtaining an Officer Training Scholarship from the Canadian Armed Forces and graduating from the University of British Columbia with a Bachelor of Arts degree. During his university studies, he had his army basic training in the summers at Camp Borden in Ontario.

He was assigned to Currie Barracks with the King’s Own Calgary Regiment where he attained the rank of Captain. After his military service, he started a career in the oil industry working on seismic crews before being hired by Imperial Oil in 1955. Ivor had a successful career up until his retirement in 1986.

Ivor married his beloved wife Roberta in 1954 in Rimbey, AB after a brief courtship during his breaks from seismic work. Once he started working for Imperial Oil, they moved to Calgary where their son Robert Jay (Jay) was born in 1956.

After retiring, they sold their house in Calgary and moved to Magna Bay at Shuswap Lake where they purchased a lot and had a house built according to their detailed plans. In this home, they warmly welcomed their daughter-in-law from Venezuela upon her arrival in Canada. Soon after, their house became “Grandma and Grandpa’s place”. Ivor and Roberta enjoyed many retirement activities in the North Shuswap region until Roberta sadly passed away from cancer in 1997.

Ivor later had a loving companionship with his dear friend Stephanie (Stevie) Forman. They spent some winters in Yuma, Arizona and summers between Calgary and Magna Bay until her passing in 2011.

Ivor then moved to Jay and Iris’ house and continued to spend his summers in Magna Bay and winters in Calgary until he could no longer travel. His final years were spent under the care and attention of his loving family and enjoying the company of his beloved great-grandchildren. He maintained an inspiring positive attitude despite his steadily deteriorating health.

Ivor enjoyed fishing, hunting, and playing golf. He was an avid sports fan and spent many hours watching games on television. He was continuously fascinated with the technological advances he witnessed throughout his lifetime.

Ivor was a family man who was loved deeply by his family and admired greatly by friends and acquaintances. He will be remembered for his cheerful disposition and witty sense of humor.

Funeral Services will be held at McInnis & Holloway (Fish Creek, 14441 Bannister Road SE, Calgary, AB) on Sunday, June 5, 2022 at 2:00 p.m. Family and friends who are unable to attend Mr. Burchnall’s service can view it live (see below). Reception to follow in the Hospitality Centre at the Funeral Home. Condolences, memories, and photos can also be shared and viewed here.

Share Your Memory of
Ivor
Upload Your Memory View All Memories
Be the first to upload a memory!
Share A Memory
Send Flowers