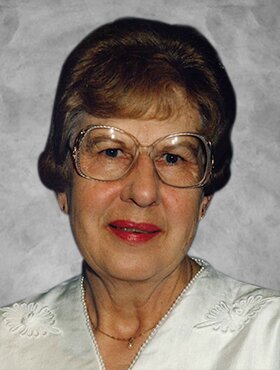 After 94.5 years of good life, Louise passed peacefully late on the night of May 17, 2022.   The eighth of nine children, Louise was born in Coronation, Alberta and grew up on a farm near Federal.  After completing high school in Coronation, she attended the University of Alberta and obtained her teaching certificate.

She taught in Barrhead, Rollyview, Clyde, and Stony Plain, then moved back to Edmonton and taught at King Edward, Oliver, and Allendale schools. Many of her early teaching positions were in one room schools. She was always interested in her students and what they did in their lives long after they left her classrooms.

She met Walter Dmitroca at the Calgary Stampede, and told her friend on the bus ride back to Edmonton that she was going to marry that man, which she did on July 11, 1959.   Walter was a geophysicist and their first married year was spent following the oil rigs, after which they settled in Edmonton where they had three children, Donna in 1960, Ken in 1961, and Rob in 1965.  When the children arrived, Louise left teaching and devoted herself to the work of raising her family. When Donna was six, Louise and Walter relocated to Calgary but were shortly transferred to Dallas, Texas for one year before returning to Calgary.

Louise’s family, friends, and community were her life and joy.  Louise and Walter founded and ran the Brentwood Community League bridge club.  After Walter’s retirement, they also loved to travel abroad.  Louise had a keen interest in genealogy and became the family historian, laboriously searching microfilm records in an era long before computerization.

At Louise’s request there will not be a formal funeral, but her children invite you to gather at the family home Sunday, May 29th from 12 to 4 pm for an open house and celebration of her life.   Her ashes will be interred in the Haneyville pioneer cemetery later this summer. Condolences, memories, and photos may be shared and viewed here.

Share Your Memory of
Louise
Upload Your Memory View All Memories
Be the first to upload a memory!
Share A Memory
Send Flowers