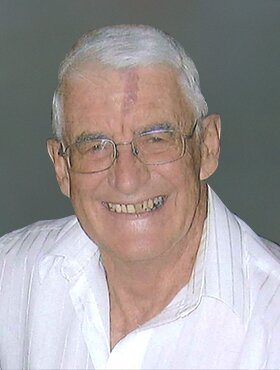 It is with much sadness that the family announces the passing of Donald Ralph Bond, with his loving wife Wendy by his side, on Sunday, May 22, 2022, at the age of 86 years.

Don was born to Mary and Ralph Bond in Maple Creek, SK on March 14, 1936. In 1959 he moved to Calgary. He was a very hard worker and did many jobs, some of which included selling vacuums, Watkins products and pumping gas. He worked in construction and in 1986 started his own company DR. B’s Contracting.

Wendy and Don met at a singles’ dance on the 1990 May long weekend and he literally swept her off the feet. They were inseparable. Is it a coincidence that he passed the same weekend 32 years later?

He loved his sports, playing in the Calgary 55 slo-pitch league in many tournaments all over Alberta, BC for 23 years, and he even participated in the Huntsman World Senior Games in St. George, Utah. He was competitive but always had fun, with Wendy being his biggest fan. We spent 20 winters in Yuma, Arizona where we developed many lifelong friendships. There he learned the game of pickleball. He would play three times a day or more if he could and even continued it in Calgary.

Don’s health started to decline when he took a fall getting off his bike and fractured his femur in 2017. In 2020 two days past their 28th wedding anniversary he suffered a stroke and was placed in long term care at AgeCare Glenmore until his passing.

Besides his loving wife, Don leaves behind his family of six children, Lavel, Larry (Kathy), Kelly (Leslie), Merlin, Dawn René (Owen) and Brent (Barb) and their mother Jean; two stepchildren, Lori and Bob (Teresa), one brother Ron (Maelene); and his sisters, Kerin (Ernie) and Yvonne. Don also had twenty-three grandchildren and six great-grandchildren, nieces, nephews as well as many friends. Don was predeceased by one brother Raymond and one daughter-in-law Felicity.

He will be remembered for his great sense of humour, always willing to help a friend and for his competitive nature. Don always had a smile on his face. He used to say: “If you can’t be handsome at least be handy”. According to Wendy he was both!

As part of Don’s wishes there will be no funeral service, instead he asked that we share our time and a drink with family and friends. Condolences, memories, and photos may be shared and viewed here. If friends so desire, memorial tributes may be made directly to the Heart & Stroke Foundation of Alberta, 200, 119 – 14th Street N.W., Calgary, AB T2N 1Z6 Telephone: (403) 264-5549, www.heartandstroke.ca or to the charity of one’s choice.

The family would like to thank the staff at AgeCare Glenmore for their wonderful care over the last one and a half years.