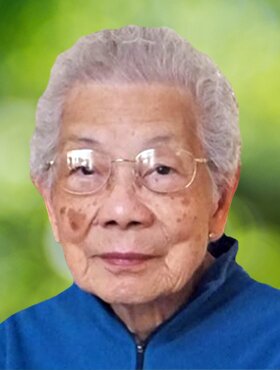 Siok Twen was born in Jinjiang, Fujian Province, China. She was the eldest in her family and had three brothers and one sister. She was tutored in private at an early age and was one of the few pioneering women of her time who could read and write and had escaped the ordeal of foot binding. In the 1940s, Siok Twen married to Mr. Cheung Kai Lam and moved to Hong Kong in the 1950s. Together they had one son and three daughters.

Hong Kong was not an affluent city in the 1950s and 1960s. Starting life in an unknown city, and not knowing a word of Cantonese, Siok Twen showed great resilience. Gradually, she got used to living in Hong Kong and it became home for her and her four children. She was kind and gentle with her neighbours who looked out for each other. Even though she was in Hong Kong and had limited means, she would help her relatives in China whenever she could.

In the 1980s, at the age of 60, Siok Twen once again took the leap and moved to Canada with her children. She has learned hard to adjust herself to a new culture, overcame the language barrier, and became a Canadian citizen.

Siok Twen’s golden years were spent in Calgary and enjoyed a healthy life. At the beginning of this year, she suffered from a fall and was hospitalized. Compounded by age, her recovery was slow and her health deteriorated day after day. On Friday, May 27, 2022, surrounded by her son Patrick and her daughter-in-law Samantha, she passed away peacefully.

Siok Twen embodied a remarkable spirit that her friends and family will truly miss and always remember.

Funeral Services will be held at McInnis & HOLLOWAY (Chapel of the Bells, 2720 Centre Street North, Calgary, AB) on Friday, June 3, 2022 at 6:00 p.m. Family and friends who are unable to attend in person are invited to join Siok Twen’s service streamed live (see below) on the day of the service. Condolences, memories and photos can also be shared and viewed here.

Share Your Memory of
Siok Twen
Upload Your Memory View All Memories
Be the first to upload a memory!
Share A Memory
Send Flowers