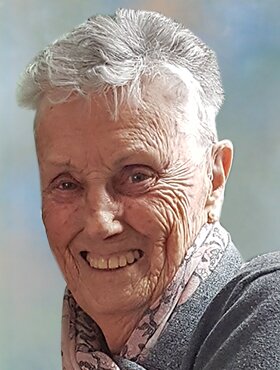 Janet MacLeod of Calgary, Alberta, passed away on Saturday, May 28, 2022, after a two-year battle with cancer at the age of 78.

Janet was born in Ardrossan, Scotland on March 12, 1944 and she moved to Canada from Scotland at the age of eight with her brother and mother.

Janet was an avid golfer and knitter. Nothing pleased her more than seeing one of her creations being worn or brought back for repairs because an item started to fall apart after so many years of love and use. Each new baby was greeted with a blanket specifically designed for them. Janet was very involved with her community; by organizing dances, helping raise money and painting the Community Centre.

One of her favorite activities was taking her grandchildren to the lake and watching them splash around and play in the sand. Janet cherished her time spent with family and friends. Deck parties at her home were legendary. Many a younger generation was introduced to the dances Janet loved as a teenager. Music and dancing were a massive part of Janet’s life, and she often was the first to hit the dance floor and the last to leave.

Janet is survived by her children, Scott (Terri), Mandi (Dan) and her grandchildren Mason, Nolan and Bronwyn. Janet was predeceased by her husband John and her brother Hugh.