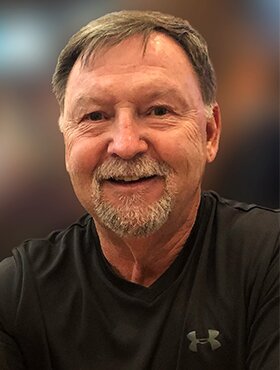 Clayton Lobe beloved husband of Julienne Lobe (nee Perks) of Three Hills, AB, passed away on Saturday, May 28, 2022 at the age of 68 years.

Clayton was born in Edmonton to Chester Lobe and Mabel Wilkinson. He grew up in a variety of places throughout British Columbia and Alberta before making Three Hills his home during his high school years. He was an avid athlete, friend to many, and this was where he met his longtime love, Julienne. After graduation, Clayton received his Bachelor of Education from the U of C and accepted a teaching position in Fort McMurray, Alberta.

Clayton and Julienne were married on September 30, 1977 and soon began a family, which brought them back to settle in Three Hills. In 1980, they welcomed their first daughter Marti, and at this time Clayton was heavily involved in the real estate business in Three Hills. In 1982, Jami was born, and Willi and Geordi followed in 1984 and 1986. Throughout the course of these years in Three Hills, Clayton worked hard for his family and began many successful business ventures. He was a hard-working, intelligent man, whose greatest joy was his family. When he wasn't working on his next business deal, you could find him on the golf course, at the fishing dam, coaching, hockey rink, school gym, farming, walking, or spending time with his beloved family. He was a man of great integrity and value, and he took great pride in his faith. In 2008, when Ava, his first granddaughter was born, he began his most important job yet; grandpa. It was in these last fifteen years where Clay seemed the most at home. He relished in spending time and sometimes (often) spoiling these grandkids.  He always had an ear to listen, a shoulder to cry on and was absolutely devoted to this role.

Anyone that knows Clayton knows that his children and grandchildren were his pride and joy; however, he was known to many as a friend, counselor, confidant, and master advice giver.  He always had time to listen, offer support, and his kind and compassionate nature is what we will remember the most.

A Funeral Mass will be celebrated at St. Anne of the Prairies Catholic Church (431 St. Annes Ave, Trochu, AB) on Friday, June 3, 2022 11:00 a.m. Graveside Service to follow at Three Hills Cemetery. Reception to follow at Three Hills Community Centre (212 Main St, Three Hills, AB). Family and friends who are unable to attend in person are invited to join Mr. Lobe’s service streamed live on the day of the service here. For those who are unable to view live, a recording of the service will be posted. Condolences, memories, and photos may also be shared and viewed here.

Share Your Memory of
Clayton
Upload Your Memory View All Memories
Be the first to upload a memory!
Share A Memory
Send Flowers