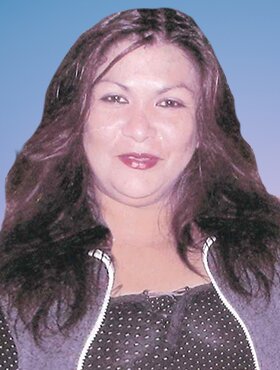 It is with great sadness that we announce the sudden passing of our beloved mother, grandmother, sister, auntie and friend, Cynthia (Cindy) Rose McGillis-Starlight, of Tsuut’ina Nation, AB on Friday, May 27, 2022 at the age of 56 years.

Cindy was a free spirit with so much love and joy to give to everyone she met. She had many friends in all walks of life. Anyone who knew her was blessed to have her in their lives, everyone she met became family. Cindy attended P.I.C.S.S. (Plains Indian Cultural Survival School), where she was part of an environment that engaged in academics/cultural and Indigenous ways of being, alongside all her siblings, relatives and close friends who became lifelong family. Cindy was a loving grandmother to her two grandsons, and she loved all her grand babies so much.

Cindy is survived by her sons, Craig and Chad (Tracella); her only daughter Kelly McGillis; her parents, Christine Starlight and Andy (Mariam) McGillis; siblings, Leslie Rattlesnake, James Starlight and Derek (Byrdie) McGillis; her grandsons, Dayton, Mateo, Tayson, Joelan, Elias and Jonah; granddaughters, Katelynne, Harmony, Tanaya, Amaya, Cheyenne, Danica, Eva and Ava. She is also survived by her many nieces and nephews as well as many cousins and friends.

Wake Services will be held at the Residence of Christine Starlight (Tsuut’ina Nation, AB) on Thursday, June 2, 2022 at 4:00 p.m.

Share Your Memory of
Cindy
Upload Your Memory View All Memories
Be the first to upload a memory!
Share A Memory
Send Flowers