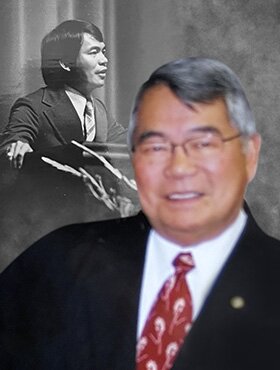 Olre Sudayan Presbitero, beloved son, brother, pastor, husband, father and grandfather passed away peacefully in his sleep on June 7, 2022 at the age of 80 years.

He grew up and spent his formative years in Sta. Cruz, Laguna, Philippines, finishing his elementary and High School days in the same town. After High School, he attended Febias College of Bible and finished a degree in Bible and Theology. After that he went to the Lyceum of the Philippines to do and finish a degree in Psychology, took his masters degree at the University of
Sto. Tomas (UST). Then  he was given the opportunity to take and finish a Masters degree in Pastoral Theology at the International College in Honolulu, Hawaii where he was also ordained in the Ministry. He also finished a Doctorate degree in Nouthetic Counseling from Trinity College of the Bible and Theological Seminary.

His first pastorate was in Murphy, QC, Philippines. During the course of his ministry, he taught at his alma mater (Febias) and at the Conservative Baptist Bible College.

He was also the Dean of Academic Affairs at Febias College of Bible for one term and was President of the Conservative Baptist Bible College (CBBC) after coming home from Hawaii. He mentored a generation of Pastors and Christian Workers, was instrumental in the planting and establishment of three Churches (one in the Philippines and two in Canada).

Olre with his wife Belen (they were married on April 7, 1968), and their family answered the Lord’s calling to do missionary work to plant a Filipino church thru the BGC-A (Baptist General Conference – Alberta) in Calgary, AB in October 1986. Olre cherished and loved serving the Lord and continued to do so until he was called home to glory.

He will be remembered as a very loving and affectionate husband, strict but gentle Dad, doting grandfather, an understanding, strict and compassionate Pastor / Counselor and will be missed.

The family would like to acknowledge and give a huge THANK YOU to the Doctors, nurses, and staff at Unit 64 of the Foothills Medical Centre for taking care of Dad during his last days, and also the staff and nurses at the Sunridge Hemodialysis Clinic and Peter Lougheed Hemodialysis Clinic for their care and support during Dad’s dialysis sessions.

With Dad’s request and wish in mind, the family would like to request for privacy at this difficult time.

Share Your Memory of
Rev. Dr. Olre
Upload Your Memory View All Memories
Be the first to upload a memory!
Share A Memory