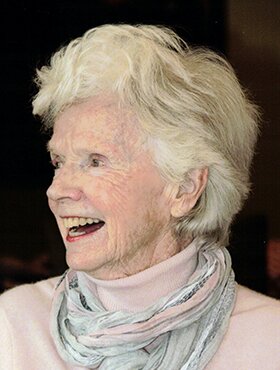 Lorraine was brought up in Vancouver, where she completed high school and one year at the University of British Columbia. She moved to Winnipeg in 1952 and became an air hostess for Canadian Pacific Airlines in 1953. That year she met Bill Milne, an architect, fell in love, and they were married in 1954.  In 1955, Lorraine returned to university and received her Bachelor of Arts Degree and her Master of Science Degree, both in Psychology, at the University of Calgary.  She worked as a psychiatric social worker for the Alberta Government, and later, for thirty years, as a part-time psychology instructor at Mount Royal College (now Mount Royal University).  During that time, she received the Mount Royal College Distinguished Teaching Award for excellence in teaching.

Lorraine and Bill were both disappointed that they did not have children, but they had each other for fifty-four wonderful years. Together they enjoyed biking, hiking, skiing, sailing, and traveling. Bill died in February of 2008.

At Lorraine’s request there will be no funeral or memorial service. Condolences, memories, and photos can also be shared and viewed here.

Share Your Memory of
Lorraine
Upload Your Memory View All Memories
Be the first to upload a memory!
Share A Memory
Send Flowers