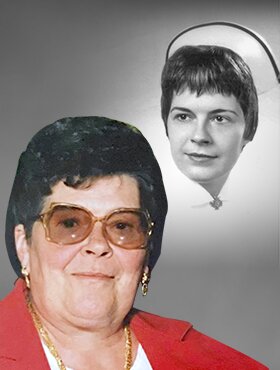 Marilyn was born in London, Ontario on June 19th, 1941 where she graduated from Sir Adam Beck Collegiate in 1959. Mom’s dream was to be a sports reporter but decided to go into nursing instead. Marilyn graduated from the St. Joseph’s Nursing School in 1963. Mom lived and worked in London, ON until 1965 when she moved to Montreal, QC to work in several hospitals. She moved back to London in 1968.

Marilyn loved to travel with her friends. They went to Nassau, Jamaica and numerous other tropical locations. It was in 1968, on her last week in Barbados, that she met a young man named John Love. It was not love at first sight. Mom wrote to Dad and their love blossomed and in April 1969, they were engaged and got married in October 1969. After they got married, they moved to Montreal and settled down. In 1974, they welcomed their first daughter and in 1977, they welcomed their second daughter.

In 1984, the family was transferred to Calgary, AB when CPRail moved their head offices there. Marilyn worked at the Calgary General Hospital, in the NICU unit and then in 1988, when the Peter Lougheed Centre opened and the NICU moved there, Mom followed, where she worked until her retirement in 2006. Mom will be most remembered for her letter writing, her cross stitch and knitting and her love for Old English Sheepdogs, polar bears, and cardinals. She loved watching her granddaughter play soccer as well. Mom was known as ‘Soccer Gran-Gran’.

Besides her loving husband John, Marilyn is survived by her two daughters and sons-in-law, Kiera and Shawn Plume and Erin and Dave Pratico; and granddaughter, Zoe and step-granddaughter, Lexi all from Calgary, AB; as well as numerous cousins, and friends. She is also survived by her sister-in-law Joyce Reid from Brandon, Manitoba. Marilyn was predeceased by her father, Raymond in 1978 and her mother, Gardean in 1997. As well as numerous aunts, uncles and cousins.

A Celebration of Life for Marilyn will be held at a later date. Condolences, memories, and photos can also be shared and viewed here.

The family would like to thank the doctors and staff of Unit 72 at the Foothills Hospital and at Southwood Hospice for taking care of Mom. You are truly angels amongst us.

Share Your Memory of
Marilyn
Upload Your Memory View All Memories
Be the first to upload a memory!
Share A Memory
Send Flowers