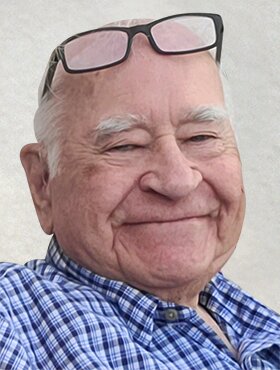 He moved to Grande Prairie, AB as a teenager because his parents wanted him to attend an urban high school offering better education than the country school he had been attending. Bud graduated from SAIT’s school of construction with a sheet metal ticket. He worked in the trades for a number of years and got both his Class B and Class A gas ticket. Bud married his high school sweetheart Fern Penny in 1954.

Bud was always a hard worker.  During his time as the branch manager of a propane company in Manning, AB, he was always concerned about customers not having heat, especially when the temperatures were often 20 - 40 below.  He would deliver propane and thaw tanks and lines continuously, only stopping for a few hours, many times to sleep in his truck or grab some chocolate bars and pop. On weekends Bud would try and drive into Grande Prairie to help out his parents with yard work.

Bud accomplished much through his life and was particularly proud of his heritage house in Fernie, BC and all the work he and Fern did to build a homestead.  He had a passion for family heirlooms and the history of each one.  He told stories of his father moving west from Quebec and building the family farm at Buffalo Lakes. After Fern passed away, Bud worked tirelessly to document the family history dating back to the mid 1600’s.  These records will live on forever as a family legacy.

Bud’s most memorable vacation was when he went to Europe and rented a car travelling the smaller communities of France and Portugal.  He and Fern stayed in hotels with straw mattresses.  Fern liked to tell how he used his limited French knowledge to order a dozen eggs for breakfast instead of two.  The waitress brought him a dozen, laughed and clarified that he might want a few less than that.  Continuing on their trip they stopped at another restaurant where the sweaty cook was packing a loaf of bread under his upper arm near his arm pit.

Bud’s favourite thing to do later in life was to stay in touch with family and friends.  We all received an email meant to bring us joy and humour.  A little something to keep in touch and make us smile.

He will be most remembered for his sense of humour and stories.

Bud is survived by his daughter Debbie and son-in-law Boyd Johnston of Calgary, AB. He has one granddaughter Shawna Robinson of Calgary, AB; and four great-grandchildren Zach Robinson, his partner Kelsey and son Henry, Maddison Robinson and her partner Josh, Mason Johnston and Mason’s mom Amber Lyons, Becky and Scott Lindsay and their daughters Caitlyn, Hailey and Alyson, all of Calgary, AB.

Bud is also survived by his brother-in law Ken Penny and his wife Florence, cousin Clare Hawthorne and his wife Gloria; as well as numerous nieces, nephews, cousins, and friends.

Bud was predeceased by his wife Fern, grandson Jay Johnston and brother Roy LeBlond and his wife Shirley.

Funeral Services will be held at McInnis & Holloway (Deerfoot South, 12281 – 40th Street SE, Calgary, AB) on Saturday, June 18, 2022 at 2:00 p.m.  Reception to follow in the Hospitality Centre at the Funeral Home. Condolences, memories, and photos may be shared and viewed here.

Share Your Memory of
Archie
Upload Your Memory View All Memories
Be the first to upload a memory!
Share A Memory
Send Flowers