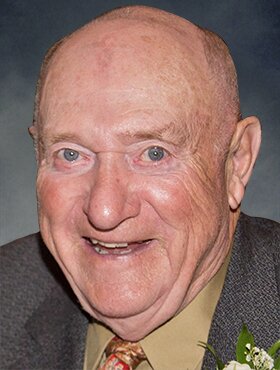 Keith Banks, beloved husband of Bonnie Banks, of Calgary, AB, passed away on Wednesday, June 15, 2022 at the age of 89 years.

Besides his loving wife Bonnie of 61 years, Keith is survived by his two daughters, Chrystal Hay (Ross), and Stacey Banks Ferguson; and son, John Thornhill (Judy). He is also survived by his five grandchildren, Aaron (Nicolle), Miles, Curtis, John, and Julia; and two great-grandsons, Maxwell and Walker. Keith is also survived by his sister-in-law, Lorraine Banks. Keith was predeceased by his parents Clifford and Melva Banks, brothers Lorne (Winnie), Lloyd, Arther, and his sister Macbeth.

Keith graduated from the university of North Dakota with a degree in BSc in Electrical Engineering in 1957, he was hired while in University to work for Schlumberger for 7.5 years in Canada. Keith formed and operated three successful companies, two of which still exist. Banks and Hansen Consulting Ltd. 1964 with a name change in 1968 to. K.B. Petroleum and Mining Services Ltd. - Present Roke Oil Enterprises Ltd. 1966 – Present.

Keith was a member of APEGA, P.Eng since 1964 and a honourable member of the Canadian Well Logging Society CWLS, as well as the Society of Petrophysicists and Well Log Analysts SPWLA. Keith always said that when he formed Roke Oil Enterprises Ltd. In 1966 he retired then to do the things he really wanted to do. Which was to manufacture tools and equipment for many geophysical applications. He was able to do this with the many talented employees that worked for Roke through the years.