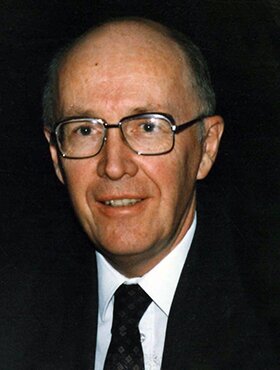 Gordon Billings, beloved husband of Mary Billings (nee Shipway) of Calgary, AB, passed away on Wednesday, June 29, 2022, at the age of 87 years.

Gordon was born on February 22, 1935, in MacGregor, Manitoba to parents John and Marjorie Billings. He had two older sisters, Della, and Janet Elonde, both of whom have since passed. Gordon spent his working career with Scotiabank. He started with Scotiabank in 1952 and retired in 1994. Gordon met Mary Selina Shipway in Kenora, Ontario at a softball game and married her in Saskatoon, Saskatchewan on April 11, 1959. They were married 63 years and remained together until his passing. They spent the last 30 years living in Calgary, Alberta. Gordon enjoyed many things in life; family, camping, and travel were amongst his favorite things, but his greatest passion was bird hunting. He particularly liked Goose hunting and Pheasant hunting. He had four beloved dogs to help him track pheasant, Duke, Duchess, Lady, and Belle. He was an avid member and supporter of the Rotary Club, Ducks Unlimited and Pheasants Forever.

Gordon Murray Billings was a great husband, father, grandfather, friend, and humanitarian. He will be truly missed.

Funeral Services will be held at McInnis & Holloway (Fish Creek, 14441 Bannister Road SE, Calgary, AB) on Friday, July 8, 2022, at 10:00 am. Reception to follow in the Hospitality Centre at the Funeral Home. Condolences, memories, and photos may be shared and viewed here.