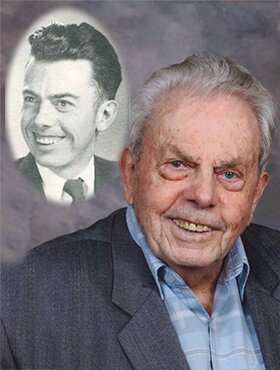 On Monday, July 4, 2022, David Schultz passed away surrounded by those who loved and cared for him at the age of 92 years.

Dave was the only child born to Suzanne and John Schultz. He was born in Waldheim, Saskatchewan, on August 1, 1929. He joined his family of two half-sisters, and a half-brother. He lost his father at the age of 17 and took on the responsibility of running the farm with his mother.

His move to Calgary uncovered one of his greatest treasures - meeting Audrey Spencer.

He attended Prairie Bible Institute in 1951, and while attending he dated Audrey Spencer. He and Audrey discovered that they both had a passion for Missions in Africa, and ironically had both applied to the same mission to service in the same country in Africa.

On November 3, 1956, Dave married Audrey. While doing some volunteer church work, he applied to SIM and was accepted for service in Africa. In 1960, Dave and Audrey travelled with their two daughters on an ocean liner to West Africa to do their lives’ work as missionaries.

Dave served as manager for the Maradi Girls School and then the Maradi Leprosarium, in Niger for over 20+ years. He oversaw the building of projects, maintenance, and supervised farm projects and was a jack-of-all-trades. Alongside his practical skills, Dave enjoyed doing evangelism work in remote villages.

In 1995, Dave retired with Audrey after 35 years of active ministry in Africa, and Canada. In retirement, Dave and Audrey enjoyed relationships with family and friends, travel, and adventure until into their 90s.

He will be greatly missed by his children, Susan (Doug), Kathie (Bill), Tim (Esther), Steve (Kathy), Sylvia (Paul); his twelve grandchildren, and four great-grandchildren; as well as numerous extended family and friends.

Dave was predeceased by his wife of 65 years Audrey; his loving parents, Susanna and John Schultz; his stepdad Jacob Willms, and his half and step-siblings.

Funeral Services will be held at Crossroads Community Church (912 19 St NE, Calgary, AB), on Monday, July 11, 2022, at 2:00 p.m. Reception to follow in the Fireside Room at the Crossroads Community Church. Family and friends who are unable to attend in person are invited to join Mr. Schultz’s service streamed live at https://us02web.zoom.us/j/83069042815?pwd=SUZlOWhaMURPNzRFYWNkWHUwaEYrdz09 on the day of the service. Meeting ID: 830 6904 2815 Passcode: 557281.Condolences, memories, and photos can also be shared and viewed here.

If friends so desire, in lieu of flowers, memorial tributes in David’s name may be made directly to Overseas Missionary Fellowship (https://omf.org/en/web/ca/giving)