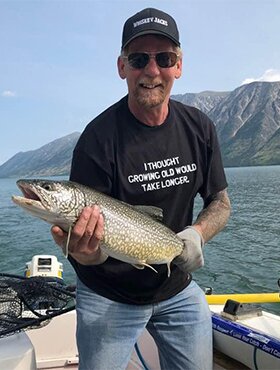 Hank was born in Maple Ridge, BC, on June 22, 1958. He moved to Whitehorse, Yukon in 1980. Hank accomplished much through his life. He was particularly proud of watching his daughter Charlene become a labour and delivery nurse and then mother to his granddaughters Madelyn and Lucy. Madelyn and Lucy loved spending time with their grandpa Hank, and he visited them at every opportunity. Hank’s skill as a butcher was highly sought after in his community and he took great pride in his trade.

Hank had many close and colorful friends and he loved spending time with them. They were often fishing, camping, golfing, travelling or sharing the occasional pint!

Hank was a helper and would give you the shirt off his back or a delicious rib roast. He will be most remembered for his boisterous laugh, quick smile, no nonsense attitude, unfailing generosity and kind heart.

A Celebration of Life will be held at a later date. Condolences, memories, and photos may be shared and viewed here.

Share Your Memory of
Hank
Upload Your Memory View All Memories
Be the first to upload a memory!
Share A Memory
Send Flowers