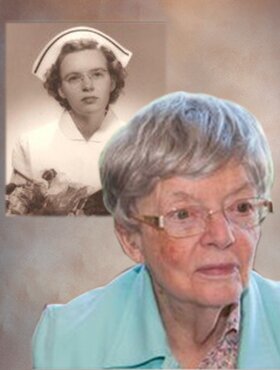 It is with sadness that the family of Elizabeth Taylor of Calgary, AB, announce her passing on Wednesday, July 6, 2022 at the age of 99 years.

Elizabeth was the eldest child of John and Hortense Taylor, born at the family farm east of Carstairs, AB, on December 23, 1922.  In 1951 she completed nurses training at the Calgary General Hospital and had a long and rewarding career with the Victoria Order of Nurses (VON) in Edmonton, AB, until 1983. Elizabeth enjoyed traveling, photography, reading and playing scrabble.

Elizabeth will be lovingly remembered by three sisters, Elinor (Late Stefan) Harasim, Bernice (Jack) Morrison of Calgary, AB, and Grace (Late Jim) Weeks of Bakersfield, CA, and her brother Roger (Late Donnita) Taylor of Carstairs, AB. Aunt Beth will also be missed by seventeen nieces and nephews and many great and great-great nieces and nephews. Elizabeth was predeceased by sister Lorraine, and brothers Harvey (Late Dora), and Bob.

At Elizabeth's request a private family gathering will be held in her honor. If friends so desire, memorial tributes may be made directly to Operation Eyesight Universal, 4 Parkdale Crescent N.W., Calgary, AB T2N 3T8 Telephone: (403) 283-6323, www.operationeyesight.com, whose charitable work Elizabeth supported for many years.

Share Your Memory of
Elizabeth
Upload Your Memory View All Memories
Be the first to upload a memory!
Share A Memory