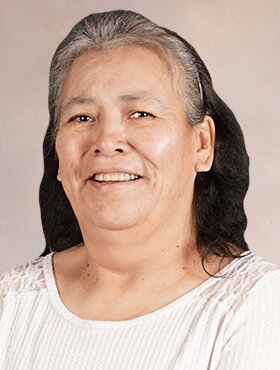 It is with great sadness we announce the sudden passing of our dear mother, Marcella Nancy Dodginghorse of Tsuut'ina, AB, on Thursday, July 7, 2022 at the age of 57 years.

Marcella graduated from the Ponoka Composite High School in 1982. She worked for Louis Bull Recreation and Housing Dept. She also worked for Tsuut’ina Nation with various departments such as Recreation, Wolf Flats Ordinance, Tsuut’ina Jr/Sr High School and Grey Eagle Casino to name a few. Marcella started her company Dodginghorse Security with her late husband Dickie Dodginghorse. They worked all over Tsuut’ina Nation. They had employed all their children and taught them everything they could about being hard, honest workers.

Marcella had an incredible rodeo career in her younger years. She participated in many events, she excelled in Barrel Racing, Team Roping, and Breakaway roping. She competed for Ponoka Stampede Rodeo Queen pageant and won the Horsemanship award. She made it to the HRC Finals during 1970’s – 1980’s. In 1992, she made it to INFR for Ladies breakaway roping. Marcella really loved the Calgary Flames; she was the biggest fan. She liked to travel and bring home souvenirs for her kids. Marcella also really loved being with her grandchildren and she was the best Kokum to them all. She raised her children to be strong and independent. She taught her children her traditional Cree ways. She was a devoted wife. She also showed her children tough love but showed compassion when they needed it. Marcella had a kind and welcoming personality. Marcella had a lot of friends. She would introduce herself as Marcee from Sarcee. She was a strong woman untill the end.

The family would like to thank the Tsuut’ina Fire Dept, and the staff from the E.R and ICU at Rockyview General Hospital for all their support and care.

Share Your Memory of
Marcella
Upload Your Memory View All Memories
Be the first to upload a memory!
Share A Memory