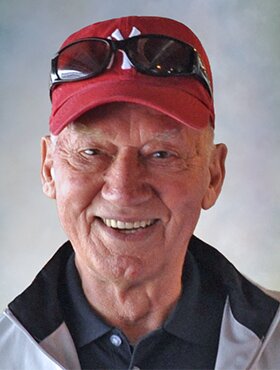 Harry Huettler, beloved husband of Elsie (nee Brisby) of Calgary, AB, passed away on Thursday, July 14, 2022 at the age of 93 years.

Harry was born in Heidelberg, Germany on March 5, 1929. He trained as an accountant in Germany until immigrating to Canada in October 1951. He began his new life in Canada working in the coal mines in southern Alberta and learning English. Harry soon moved to Calgary where he worked at Weston’s Bakery. In 1959 Harry married Elsie, and in 1967 they welcomed their only child Heidi. In 1973 Harry, following a lifelong dream, opened The Stagedoor Restaurant. Harry and Elsie worked together in the restaurant business for over twenty years, eventually opening Masters Restaurant and Pop’s Deli. After retiring, Harry enjoyed golf, working out at the Killarney Recreation Centre, travelling to sunny climes in the winters and lunches with his pals.

In 2008 Harry made the first of many trips to New York with his family and fell in love with the city. He was a keen walker and loved to explore the sights and sounds of all the boroughs. He could not be kept from Broadway after seeing his first show.

Besides his loving wife, Harry is survived by his daughter Heidi and his son-in-law Gerry Dyck, as well as two sisters-in-law and numerous nieces and nephews.

Harry’s last years were hampered by illness, and he moved into long term care at Bowview Manor where Harry received exemplary care from all the staff. His family would like to offer their sincere thanks to all the staff at Bowview.

The family requests those who wish to express sympathy to consider making a donation to The Brenda Strafford Foundation Employee Education Scholarship Fund (www.straffordfoundation.org).

Share Your Memory of
Harry
Upload Your Memory View All Memories
Be the first to upload a memory!
Share A Memory