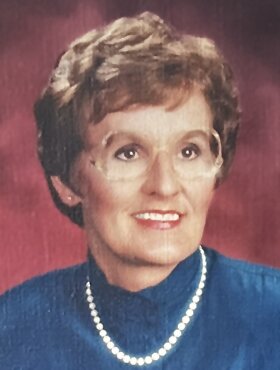 Elaine Kathleen Fidyk (nee Bourdois) passed away peacefully with her family by her side on July 16, 2022 at the age of 82 years.

Elaine was born in Rosthern Saskatchewan on November 25, 1939, to Mathurin and Margaret Bourdois. Elaine was the baby of five siblings.

Elaine leaves behind her husband of 60 years Michael, her son Wayne of Edmonton, her son Darren and daughter-in-law Heather; her grandchildren, Ashleigh (Daniel) Kaplan, Meagan (fiancé McConnell Kimmett) Fidyk, and Robin (boyfriend Erik Kardash) Fidyk of Calgary; her great-granddaughter Delainey Kaplan, her siblings, Laura Bourdois (Johan Prem) of Chase, BC and Ron Bourdois of Kamloops, BC; as well as many nieces, nephews, cousins, and in-laws.

Elaine attended a one-room school in Duck Lake, Saskatchewan where she surpassed her peers in academics then attended high school at Sion High School in Saskatoon finishing at age sixteen. She continued her studies and graduated from the University of Saskatchewan in the department of Pharmacy.

Elaine paved the way for many women by being one of a small number of females to graduate as a pharmacist from the University of Saskatchewan. Her career as a pharmacist spanned decades and included running many pharmacies and owning her own pharmacy.

Elaine was a healer, both as a pharmacist and a spiritual healer. She had strong opinions and a strong will. Likely the reason she was able to overcome many challenges in life.

Mike and Elaine met in 1961 and were married on June 9, 1962, in Saskatoon. The two celebrated the milestone of 60 years of marriage on June 9, 2022, with family and friends in Calgary. Mike and Elaine lived in various cities across Western Canada throughout their marriage. While living in Wilkie, Saskatchewan, Wayne Douglas was born in 1966 and two years later Darren Grant Michael was born in 1968. Elaine balanced work and motherhood as she followed Mike to Vancouver, Calgary, and Edmonton while maintaining her pharmacy career and raising two boys.

Elaine is predeceased by her parents, Robert (Bob) Mathurin and Margaret Bourdois, her sister Terry (Andy) Woloschuk, her brother Francis Bourdois, and her sister-in-law Ann Bourdois.

The family will be gathering on July 24, 2022, to celebrate and share memories of Elaine. Elaine will be cremated and will be interred at the Prairie Sky Cemetery in Calgary, AB.

Share Your Memory of
Elaine
Upload Your Memory View All Memories
Be the first to upload a memory!
Share A Memory
Send Flowers