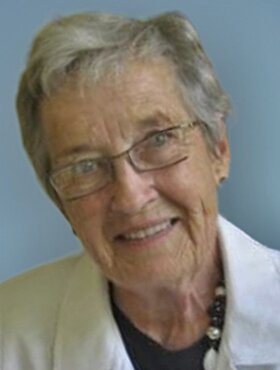 It is with heavy hearts we announce the passing of mom, grandma, great-grandma, and sister, Jean Daniel on Thursday, July 21, 2022, in Calgary, AB at the age of 92 years.

Jean is survived by her only son Tim Daniel, granddaughter Kendra (Tyler), great-granddaughter Brooklyn, younger sister Shirley Kesler, as well as many nieces and nephews. She was predeceased by her husband of 53 years Lloyd Daniel, and identical twin Sister Joyce Firth.

Born in Coalhurst, AB, Jean moved with her family as a young child to Lethbridge, AB where she stayed for many years. While in Lethbridge, Jean served as the first female in Alberta to the position of Assistant Sheriff of Lethbridge, which she held in the highest regard. If you knew Jean later in life this would have come as a surprise from her petite frame and her kind-hearted character, with the tasks set forth in her position.

Jean and Lloyd declared their vows in Lethbridge in September of 1951. A few years later they welcomed their only son Tim. Set off for a new adventure Jean, Lloyd and Tim then settled in Calgary. Settling into a new career path with the Calgary Board of Education, she spent many years with the school board, finishing her career in the district office with the super attendant as an administrative professional. She loved this role and communicating with the staff and students before retiring.

Jean's true passion was traveling. Lloyd and Jean traveled to Honolulu, Hawaii over 28 times together marking this as their top destination to travel to. When she wasn't dipping her toes in the ocean in Hawaii, she was spending time at the cottage. Happiest in her bathing suit, you would often find her swimming in the lake and visiting with her friends and neighbors, truly enjoying "cottage life".

She was held in the highest regard when it came to her family and friends. She always dressed in a pressed collared shirt, slacks and perfectly polished shoes and would commonly attend family gatherings wearing the exact same outfit as her twin sister, with many giggles over the unplanned outfit coordination.

The immediate family will be holding a private celebration of life at a later date. Condolences, memories, and photos can also be shared and viewed here.

The family would like to thank the staff of Providence Care Center for the exceptional care and kindness Jean received.

"May your toes be in the water, a sunset to rest your mind and a plum pie to fill your belly." We love you mom/grandma.