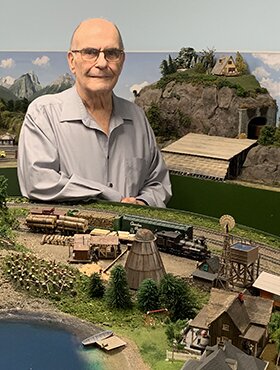 Michel Marcotte, beloved husband of Zena Marcotte of Calgary, AB passed away on Monday, August 1, 2022 at the age of 78 years.

Michel was born in Montreal, QC on December 6, 1943. He serviced in the Canadian Army as an Aeroframe Technician and then worked as a Telecommunications Technician with Bell, Ed Tel and then Telus.

Michel was a member of the Labaja Model Railway Group and Bow Valley Model Railway Club. He enjoyed building model train layouts and spending time with his grandchildren. He also loved travelling to the Philippines to visit his wife's extended family.

He was predeceased by his parents, Paulette and Joseph Albert Marcotte, and his brother-in-law Assem Abu-Isa.

A gathering to Celebrate Michel’s Life will be held at McInnis & Holloway (Park Memorial, 5008 Elbow Drive SW, Calgary, AB) on Thursday, August 11, 2022 at 2:00 p.m. Condolences, memories, and photos can also be shared and viewed here.

Share Your Memory of
Michel
Upload Your Memory View All Memories
Be the first to upload a memory!
Share A Memory