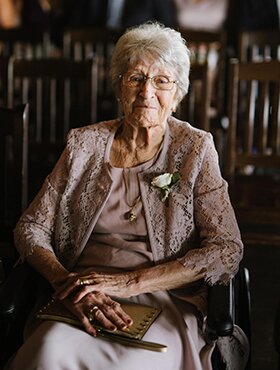 Doreen Marion Crofts (nee Radcliffe), beloved mother, grandmother, and great grandmother, passed away, with family by her side, on August 4, 2022, at the South Health Campus Hospital in Calgary at the age of 101 years and 6 months.

Born in Calgary she was the daughter of Joseph and Claire Radcliffe and a big sister to Ilene and Ernie. During her early years she lived in Peru and Columbia South America where her father worked for Imperial Oil. She moved there when she was five years old and at age fourteen, she travelled to England to attend school. She returned to Columbia after her schooling and the family returned to Calgary in the fall of 1938. Doreen completed her education at Henderson Business College in Calgary.

In 1941 in Calgary, Doreen met Rex Rowley Crofts who was serving with the R.A.F and later joined the R.C.A.F. They were married on January 23, 1943, and had three children, Malcolm, Christopher, and Sandra. Being a military wife meant moving not only across Canada, but to France as well. They eventually retired in Calgary, AB. Doreen and Rex were married for 61 years before his passing in 2004 at the age of 84 years.

Doreen had a great sense of humour and many passions. Gardening, cooking, baking, and sewing to name a few. She won first place blue ribbons for her dressed china dolls, stuffed animals, and teddy bears at the Lethbridge Fair for many years. She was a Master Chef in the kitchen and made the world’s best pastries, and steak and kidney pie.

Her family was her life.

Doreen is lovingly remembered by her two sons and daughters-in-law, Malcolm and Carolin Crofts of Cochrane, AB, Chris and Joanne Crofts of Coleman, AB, and her daughter Sandi Barron of Calgary, AB; her grandchildren, who called her Nana, Michael, Jenny, Dawnie, Steven (Megan), Trevor (Natasha), and Cassandra (Derek); as well as her great grand children, who called her Great Nana, Jaedan, Isabel, Elizabeth, Ethan, Maddison, Makenzie, Mikayla, Matthew, Marcas, Avery, and Karson and Charlotte. Doreen is also survived by her loving brother, The Reverend Ernest Radcliffe, age 96 years of AgeCare Seton in Calgary. She will also be lovingly remembered by Nichola Crofts.

Doreen was predeceased by her sister, Ilene Constant in 2018, and by her nephew, Colin Constant, in 2022.

Doreen was a resident of AgeCare Seton before her passing and the family wishes to express their most sincere thank you to the doctors and staff for your love, compassion, and care.

Mom, Nana, Great Nana, thank you for being such a bright light in our lives. You will forever be loved and remembered.

A graveside service to honour Doreen’s life will be held on Friday, August 12, 2022, at 1:00 p.m. at Queen’s Park Cemetery, (3219 4 Street N.W. Calgary, AB). A Celebration of Life Reception will follow at the Calgary Crematorium & Funeral Home (Located within Queen's Park Cemetery). Condolences, memories, and photos can also be shared and viewed here.