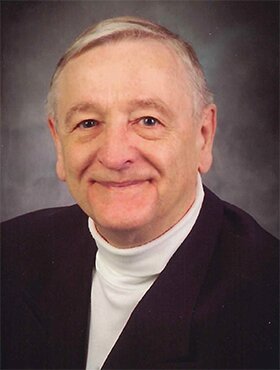 Joseph was born in Drumheller, AB, on March 9, 1936. He moved to Calgary, Alberta, Canada in 1954. Joseph went to school to complete his diploma in business with his focus in accounting. He eventually became a well know specialist in tax accounting.

Joseph married Elsie Goodfellow in 1956 and were together for 39 years until her death in 1995. Joseph was then graced with a faithful partner in Lucy Milne.

He was a member of the Fiero Club as he loved his 1985 little red Fiero. He was particularly proud to entertain many community festivals while playing his beloved accordion and was fondly know as ‘Bonavista Polka Joe’.

Joseph also enjoyed multiple sporting activities such as: boating, fishing, water skiing and golf. In his later years he was an avid gardener and grew fantastic tomatoes. His most memorable vacation was when he took the whole family to Glace Bay, Nova Scotia to watch his son play hockey in the Canada Games.

Joseph and Elsie were known as a great singing duet at all the family gatherings, but after her passing, he was lucky enough to find another partner who loved playing accordion with him and participating in community events.

Besides his loving partner Lucy Milne, Joseph is survived by his only daughter Debra and her husband James from North Vancouver, BC and three sons and daughters in-law, Greg and Rosalynd from Golden B.C, Gary and Shauna from Calgary, AB, and Glenn and Laura from Calgary, AB; he had six grandchildren, Shera from Airdrie, AB, Taylor from Golden, BC, Sarah and Matthew of North Vancouver, BC, and Eric and Ryan of Calgary, AB; along with three great-grandchildren, Carter, Nixon and Hendrix of Airdrie, AB. Joseph is also survived by his brother Edward and his spouse Barbra Oshust, of Wasaga Beach, ON and sister-in-law, Anna Oshust of Calgary AB, as well as numerous nieces, nephews, cousins, and friends.

Joseph was predeceased by his spouse Elsie, his daughter Caroline and parents, Dora and Paul, brother Mike, and sister Jenny.

Share Your Memory of
Joseph
Upload Your Memory View All Memories
Be the first to upload a memory!
Share A Memory
Send Flowers